June has been the month of adventures, there’s really no other way to describe it. And we still have a week or so left in the month to perpetuate that epicness (there should be a better word for that; I’m certain that it’s floating around in my head just out of reach). I’m utterly exhausted but happy! I’ve been trying to remember everything that has happened so I can record it, but due to having a full-time job and so many people visiting these days, it’s difficult to find a few minutes to string these sentences together — hence the delayed posts. Regardless of how accurately I account the tales of late nights with good friends, however, words don’t do these experiences justice, but I’ll attempt something, anyway.

Mink’s friend from high school, Alex, came to stay with us the weekend of June 2nd-6th, and we all got along smashingly. The night he got in from Munich, we went to Sing Your Song for the second time in a week. It’s got an unassuming door that leads downwards to an underground bar that encourages the awkwardly amazing social experiment that is karaoke.

Since it was a Thursday, the bar was almost empty, save for a group of women who looked rather terrified whenever they went up on stage to mumble into their microphones. There were a few couples and small groups there as well, but our rambunctious posse grabbed the table right in front of the stage and proceeded to dominate the singing (in volume, if not in skill) whether we were on stage or not. Everyone got up at some point to sing a song — highlights included Alex’s Johnny Cash rendition, Mink and I singing “Total Eclipse of the Heart” (complete with rather ill-executed but enthusiastic harmony), Peter and Mink serenading each other with “Can You Feel the Love Tonight?” and Mathis and Chris singing “Sweet Transvestite” from Rocky Horror Picture Show — that was a surprise to everyone, most of all to Mathis and Chris. Also, at one point, “Enter Sandman” started playing and no one got up to claim it as their own, so four of us commandeered the stage for an impromptu Metallica impersonation. We definitely killed it.

We were kicked out of the bar around 2 a.m., and hung out on the sidewalks of Vienna for a long time because it was so warm out. We made it back home around 4 a.m., voices raw from singing for four hours straight and dreading going to work in five hours — but never let it be said that we don’t make entertaining our guests a priority.

Friday night, we met a bunch of friends in Museumsquartier (affectionately called “MQ”) to drink beer and chill out on the steps of the Modern Art Museum. MQ is awesome in the summer because it has giant concrete blocks of sorts upon which to lounge, and you can bring your own alcohol, so it’s a big draw for people who want to soak up the Viennese nightlife without dipping too deeply into their pockets (did I just sound like a travel magazine there? I sincerely apologize). 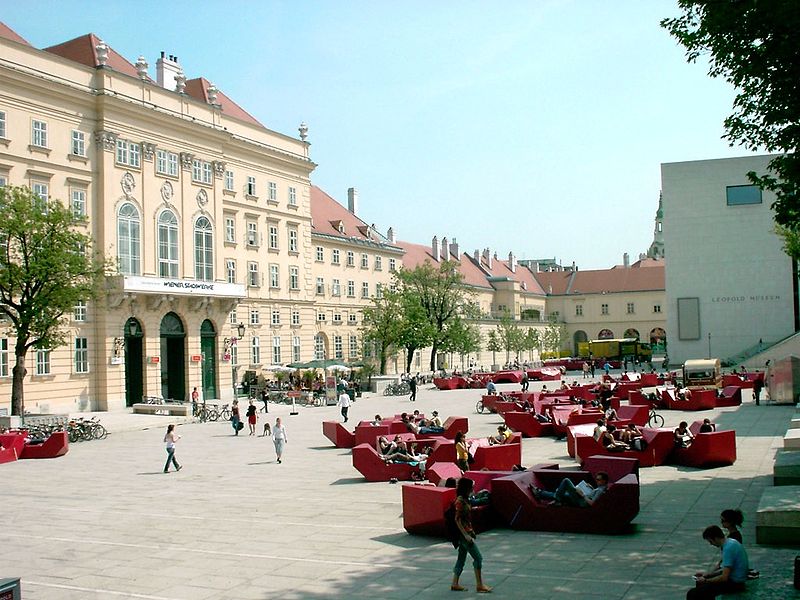 There were about 10 of us hanging out on the MQ steps, in the midst of hundreds of other strangers sharing the same good vibe. We’d been planning on going to see Boys Noize and some other DJs at the Ottakringer Brewery a bit later, but that unfortunately never transpired. I was content with the MQ experience, though, and we left around 2 a.m. in search of dancing. We walked to the ever-reliable Charlie P’s, losing a few of the less stalwart among our group along the way, but were only there for 20 minutes before the ugly 3 a.m. closing lights drove us back out into the comfortable darkness of night. We settled on beer from a U-bahn station and sitting in the park next to the Votivkirche, which is beautiful during the day or night.

As the first streaks of sunlight started to appear around 5 a.m., we decided that we should probably head home. Mink, Alex and I made a quick detour up to our rooftop terrace to catch the sunrise over a sleeping Vienna, the best way to end the night.

To take advantage of the sunshine, we decided to check out the Donauinsel for the afternoon. It’s a great summer/weekend place to hang out, since there are outdoor bars lining the edge of the Donau, boats or paddleboats for rent, and tons of people out biking and playing Frisbee.

We met Peter and David there and decided to try out the trampolines — they’re spread out over the water, with big nets draped around them to catch rogue jumpers. Apparently this the biggest trampoline setup in the world. We had a blast, but it’s extremely tiring! 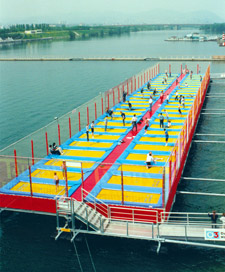 We wandered along the edge of the river and stopped at the unfortunately named Virus Bar because it had its own imported beach sand and 2 euro sangria for happy hour. The owner/server was particularly interesting — he had lovely manicured nails and his jeans were strategically slashed right under his ass to be just revealing enough to amplify his mystique sevenfold. Appropriate work attire? For sure, if you work at a place called Virus Bar. Regardless of the frustration of never getting to know what kind of underwear he was wearing (if at all), he kept us well hydrated with some of the best sangria I’ve tasted since Joey’s (soon enough though, right Sackville?).

We watched ominous clouds gathering over the hill in the distance, and we decided to make a break for the U-bahn before the storm broke over us. Apparently we have terrible judgment, since it started hailing giant ice balls down on us as soon as we were too far into the open to make a retreat. We tried to stick it out under a giant beach umbrella, but by this point the sky had opened up and was pouring itself out over the Donau. The five of us made yet another ill-timed break for a bar with an open door, getting thoroughly soaked in the 15-second dash. We waited out the storm and then made our way home through giant puddles of water and past treacherous awnings heavy with rainwater to get ready for another night out.

Mink and I decided that the guys should get a taste of what it’s like to be constantly hit on at bars, so we thought a night at a gay club would be the perfect Saturday night — fortunately, Camera Club was hosting a gay party with a (sweet) transvestite named Miss Candy. 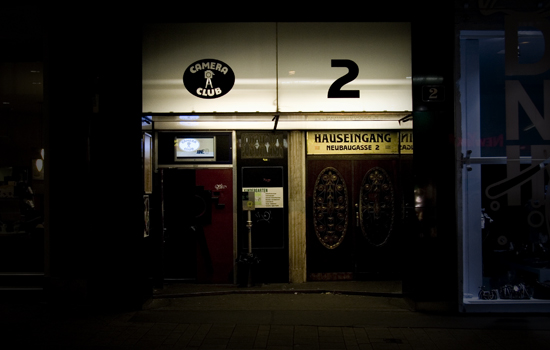 Alex painted crazy fire phoenix wings on Mink’s back and some badass bat wings on mine, and we met our friends to go dancing. The night also included three pairs of light-up bunny ears courtesy of Mink’s Easter in Hong Kong, our traditional pervy hat, the ever-trusty video camera to capture the magic, and lots and lots of glitter (unfortunately not on the boys). Camera Club was awesome, especially because I hadn’t heard crazy-dancable music like that in a club since Sky in Montreal (I miss those nights out!). It wasn’t too crowded, which meant that we pretty much had the smaller dance floor to ourselves — and Miss Candy DJed all night long (we think it may have been her, anyway. Either way, she was awesome). At last when we stumbled out of the place, we were surprised to see that yet again, dawn was breaking. So it goes.

After some much-deserved sleep, we rallied enough to go to Grinzing, the cute village/neighbourhood where Mink grew up. We chose a random heuriger to drink some Austrian wine, and it just so happened to be the most expensive wine we’ve ever had here. But the ambiance was great, and there was an accordion player, so it was fun. Just the place to chill out on a Sunday afternoon.

After we’d had enough of that spot, Mathis tried to direct us to the next heuriger — apparently it was “just at the next left,” but we ended up walking up the mountain and seeing a great view of the vineyards and all of Vienna spread out below us in the setting sun. It ended up being a two-hour trek with no heuriger in sight, but it was a beautiful detour. We made it back to the city unscathed (minus one irreparably damaged flip flop on my part) and went to gorge on victory pizza at a little Italian restaurant by Schwedenplatz.

We said a sad goodbye to Alex in the morning before work, promising that we’d all have a reunion someday soon, since the Maritimes to New York connection isn’t so far and we’ll all be back in North America in August.

And thus ended the first of four epic weekends in June.