Last night Mink, Lauren and I travelled to the small Austrian town called Wiesen to see Arcade Fire in concert. I’ve been waiting to see this band for a long time, and they were everything I expected they would be — magical, adorable, crazy talented. They’re based in Montreal, Canada, and according to a friend of mine they lived in the same rapidly gentrifying neighbourhood as he does/I used to, Pointe-Saint-Charles. Given the band’s affinity for singing about neighbourhoods and the like, I’ll take that tenuous connection as some sort of sign that it was fate for me to see them one day. Strange that I got to see them in Austria, of all places, but I like strange. 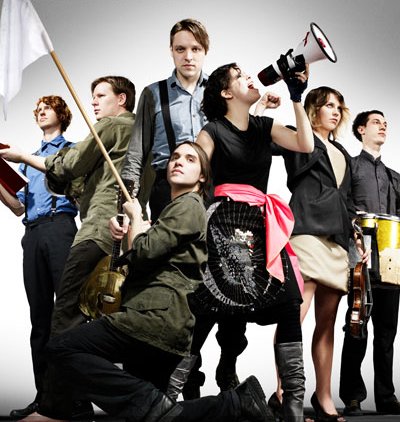 Also as expected, there were a ton of hipsters flooding into Wiesen for the night — Austrians and English-speaking folk alike. It reminded me of Montreal, such was the percentage of the asymmetrical-haircut-sporting, rake-thin population wearing oversized glasses, granny shoes, huge tote bags, ironic t-shirts, and/or skinny jeans. Felt like home, really.

Since we couldn’t find the shuttle from the center of Vienna to Wiesen, we ended up having to take the train, so it took us a bit longer than expected. Unfortunately — since concerts here tend to start promptly at the time it says on the ticket for some reason, very much unlike in Canada — we completely missed The Weakerthans. This was one of my favourite bands in high school, since they are from lovely Winnipeg (ha, lovely), and I was bummed that we didn’t catch any of their set. Their song, “One Great City,” aptly sums up my (or most people’s) love/hate relationship with Winnipeg:

Happily enough, though, I’ve seen The Weakerthans before (at a festival in Halifax in summer 2008) and they were amazing… so I wasn’t devastated that we missed them. Also, I haven’t been keeping up with their latest work, so I would have wanted them to be playing stuff from 2007 and earlier (note to self: update my Weakerthans selection; I’m sure their lyrical prowess has only grown in the past four years).

Next up was José González, who is a phenomenal guitar player. He is someone I listened to a lot in undergrad, but admittedly I hadn’t had the urge to listen to him in a while. Luckily, he ended up playing a lot of songs from the two albums of his I’m familiar with, In Our Nature and Veneer. According to Wikipedia, he doesn’t even have new albums, so that worked out well for my listening pleasure. He has a captivating voice, and amazing stage presence considering he was just one guy with a guitar sitting on a chair in the center of the giant stage. I don’t think the thousands of hipsters waiting for Arcade Fire appreciated him as much as they could have. My favourite song of his always and forever is “Heartbeats,” a cover of that song by The Knife. This video, a Sony Bravia commercial with Jose’s cover, is worth a watch — it’s thousands of bouncy balls flooding San Francisco!

After that, we snaked our way close to the front to wait for Arcade Fire. There was a long wait for the stage to get set up, but it was worth the wait. They played for nearly two hours, and they were flawless. This is a rather shaky video taken of them playing “Neighbourhood #1 (Tunnels),” one of my favourite songs from their first (also flawless) album, Funeral:

There are eight people in the band, and they each played at least two instruments, and sometimes as many as four, throughout the course of the set. How is it possible that so much talent can be crammed into eight merely human bodies? I was (and still am) in awe. They played a ton of stuff from Funeral and their newest album, The Suburbs, but not so much from Neon Bible (too bad, but we can’t have it all, right?). Here’s the set list; pick out your favourites:

I have a particular affinity for “Crown of Love,” since it was the first Arcade Fire song I ever heard and it led to the discovery of Funeral. My favourites, however, were the last two songs of the main set, “Neighbourhood #3 (Power Out)” and “Rebellion (Lies),” and then “Intervention,” which I was betting they’d play in their encore. I admit I was close to tears during those three songs, but I made a promise to myself never to cry during a concert after a girl behind Mink and I at the Coldplay concert (Osheaga in 2009) cried obscenely loudly for the entire performance — nothing ruins a concert buzz faster. So, no tears shed for Arcade Fire on my part. But they were otherworldly and beautiful and somehow profoundly human at the same time. Not every band achieves this state during their performances, and it’s incredible to feel a part of the energy some people manage to conjure through a particular combination of sound, visuals, and their sheer stage presence (Sigur Rós sticks out as another instance of this — see this video Untitled #8 for an inadequate example).

Lauren, Mink and I wandered away from the venue with thousands of others and caught a shuttle bus back to Vienna. A call from Matthew confirmed that another concert, Pantha du Prince, still hadn’t started and we should try to get to it. I only recently found out about this guy and would have loved to catch his performance, but the bus dropped us off five minutes away from our apartment and we were too exhausted to make the trek downtown for the show. Another time, Pantha du Prince.

This was our last big concert for a while — but hopefully we’ll catch Flying Lotus in July, since he’s another musical genius who, according to my brother, Dave, puts on an incredible performance.

Simply put, live shows are like crack to me; I’m a proud addict. I may have no clue where I’m going to be living as of August, but I’m certain it’ll have to be in a city that attracts this variety of incredible performers… it just has to be.