Mount Vesuvius was an experience not to be replicated, to be sure, but the city of Pompeii itself is a fantastic, hazy dream.

Here’s some reading accompaniment by an artist I recently discovered, SBTRKT. This song, “Right Place,” samples Radiohead’s “Everything in Its Right Place” – who would have thought that this audioperfection could ever be enhanced? Yeah, I’m pretty excited about this one:

Mink and I walked around Pompeii for hours, and I’m sure we only covered a fraction of the huge area that afternoon. Here is a long street, characteristic of the many that crisscross through the dense city:

I expected this network of dusty streets and the shells of houses, which was what I got for the most part (along with the ever-present swell of tourists surging down the open streets). Strangely, though, there were stray dogs everywhere, lounging in the scant shade of alleys and houses with their tongues lolling. There were many signs warning to stay away from them, as it seems they just wandered into the city at some point and never left but were nowhere near tame enough for one to risk petting. For the most part, they were handsome German shepherds or mixes with a strong hint of that breed in them. It somehow made the city seem inhabited, alive – and I suppose those dogs do consider it home.

A steep passageway into the city, with slippery stones worn down by many sandaled feet:

We had intended to procure a decent map on the way into the ruins, but apparently we missed the line for any such map. We were given a terrible, tiny map and just had to hope for the best in our self-guided tour of the city. This entailed a lot of wandering and the inevitable circling back through the same streets. Part of the challenge of walking in Pompeii is that many of the side streets are closed off at any one time for repairs and to preserve them as much as possible, so our route grew quite labyrinthine. I think we saw most of the significant buildings and gardens, which was impressive considering we were only there for the afternoon.

One of the street signs indicating the district, not that this ended up helping us much in the way of direction: 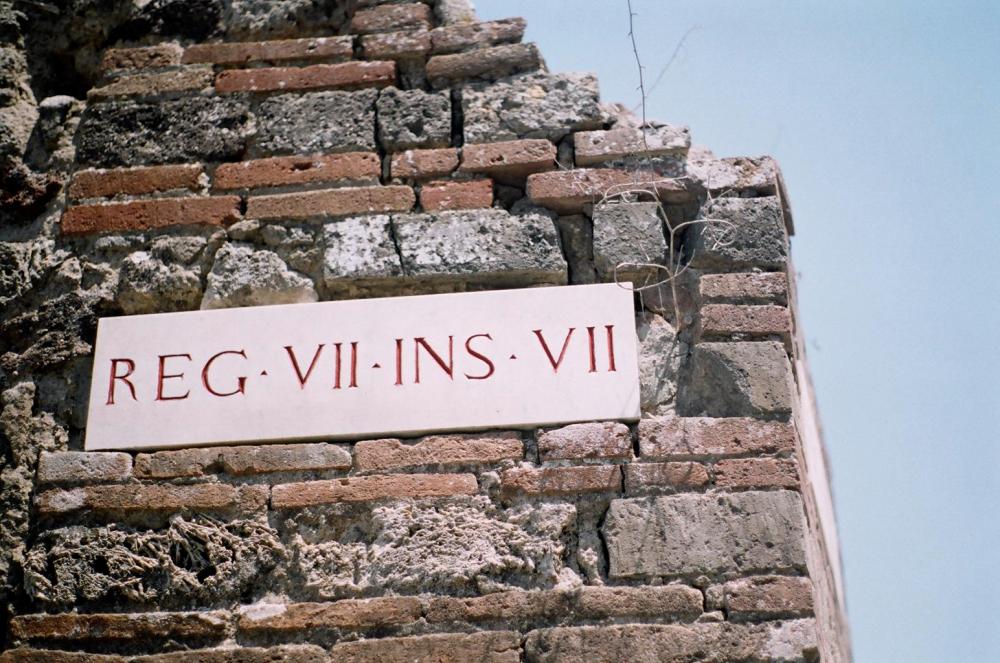 We happened upon this place as some dad was coercing his 10-year-old kid to “do a performance” down on the stage area. The kid was just on the cusp of that age where one’s parents become extremely embarrassing to be seen with in public, and he was hesitant – especially when he saw me grinning at him from the audience. He finally broke down, though, since the temptation to perform a monologue at the top of his lungs in Pompeii was too great to resist. He had an impressive set of lungs on him, too, considering how scrawny he was.

The seats of one of the amphitheatres:

It was incredible, the amount of liberty we clumsy and ignorant tourists were given in our wanderings. There were hardly any barriers, except where the ruins were dangerous or there was artwork to be preserved in the rooms. Other than that, we were free to walk through the houses, touch the cool stone of the shaded walls, pretend to be zealously cooking bread in the brick hearths…there may or may not be a photo of me doing that, but here’s one of just the hearth:

This is a mural that was preserved inside one of the houses. The colours are shockingly vivid, for a city that was buried by ash in 79 AD:

Some giant clay pots that look like they could still be used today (although I’m not betting any money that I could actually lift one of those bad boys):

A pillar jutting up, with that culprit Mount Vesuvius looming in the background: 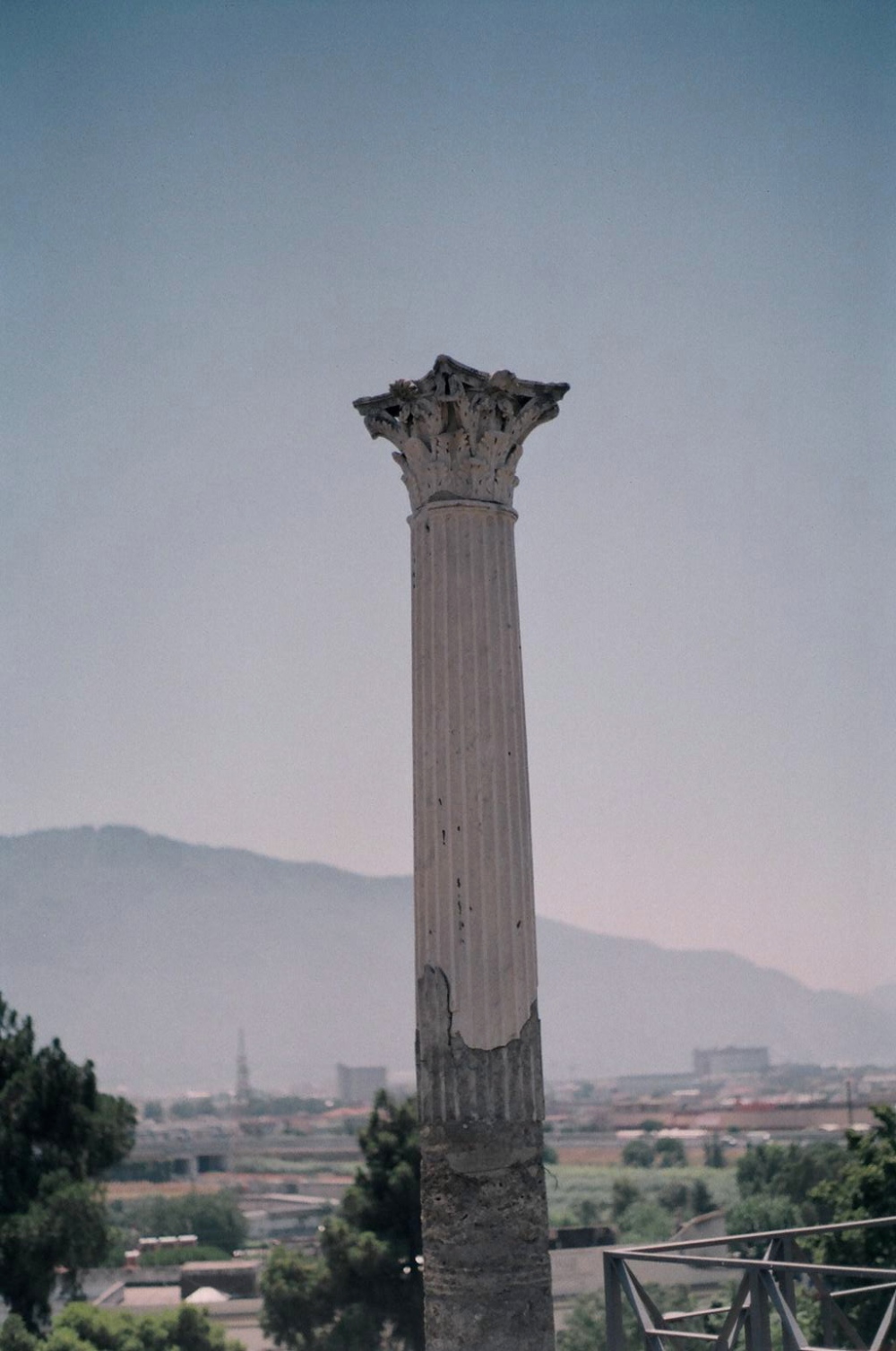 Oh, and it was hot, did I mention that? As Mink went to this fountain to refill her water bottle, a battalion of annoying children insisted on pushing in front of her to replenish their bottles and drink from the spout with their mouths and generally act like a herd of mutinous goats. She was not amused. I got a good photo out of it, though:

The architecture of this place… I can’t even elaborate beyond that, or fathom how wonderful the city was before getting pulverized by ol’ Vesuvio up the way there. 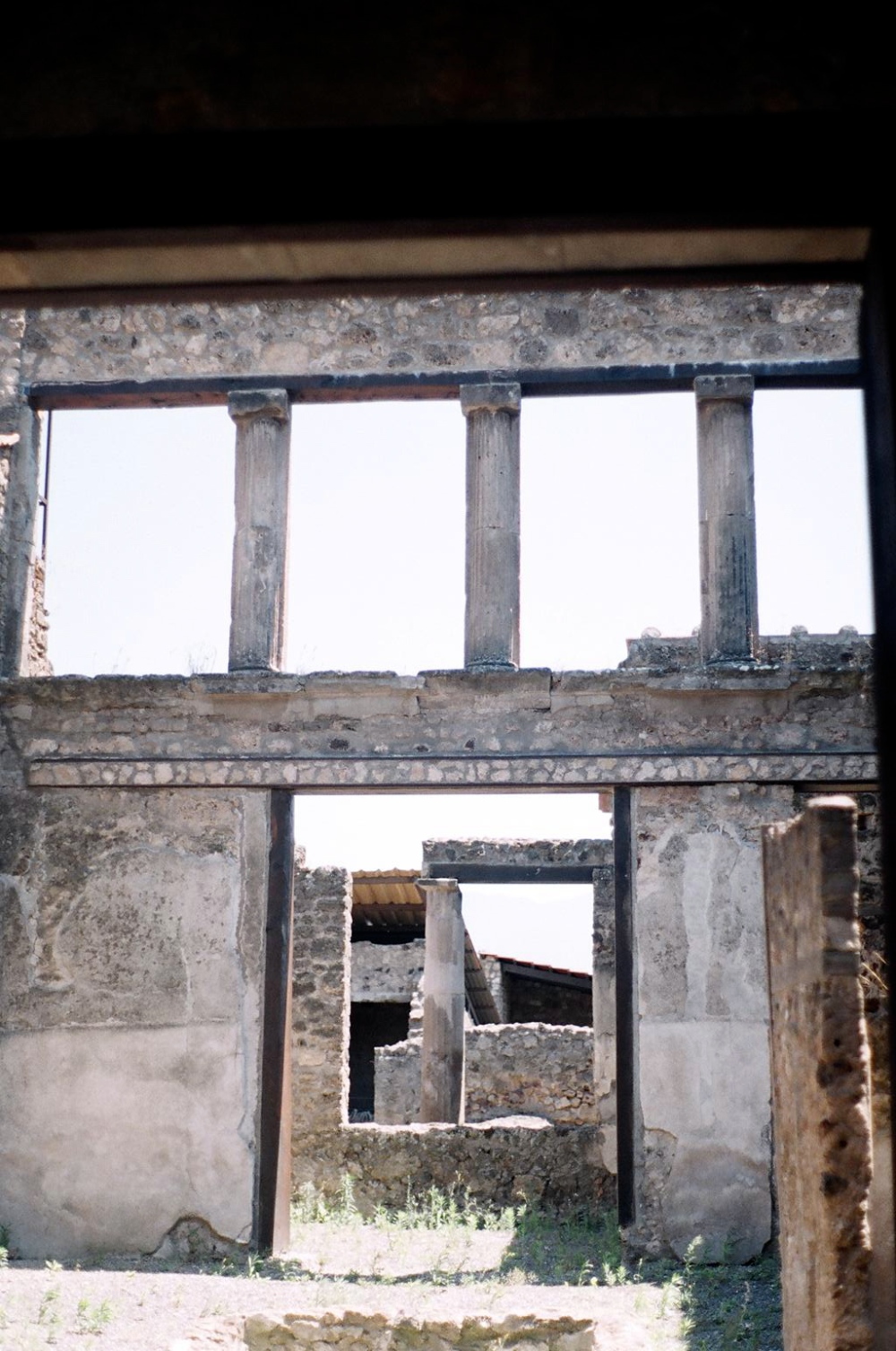 One of the creepiest places to visit in Pompeii, called the Garden of the Fugitives, was tricky to find. We had stopped for a break in the shade to drink some water, just about done for the day. This view from the slightly elevated wall was worth the climb:

However, we really wanted to see the Garden of the Fugitives, since it has plaster casts of people who had died from the poisonous gas from the volcano before there was ever any lava on the scene. We turned one last corner, ready to give up if it wasn’t there. But, in a modest corner of Pompeii, tucked away from the stately murals and the main roads and housed in their own special glass exhibit – there they were. 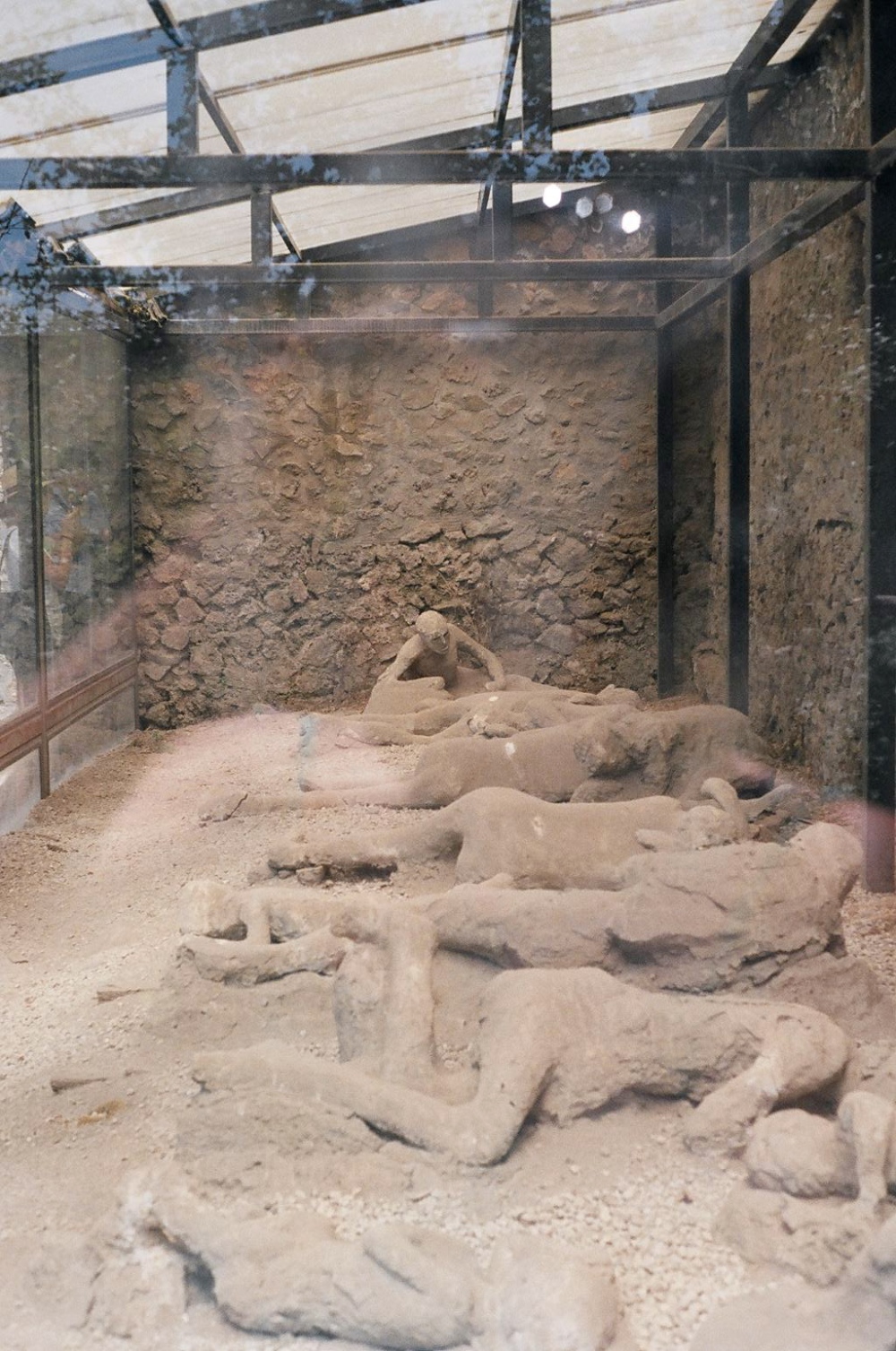 The Garden of the Fugitives was a final resting place of an entirely different sort than the sedate cemeteries I have visited.

Looking at these plaster replicas of people who had died in agony, it dawned on me for the first time that the entire city of Pompeii was a mass burial ground. Both the cause of death and the method of burial, in this case, had been the same unyielding force of nature.

After we made it back to Naples, we stopped close to the train station for a rather unfortunate piece of pizza before our trip back to Rome. The area was indeed very hectic, and filled with hawkers trying to get people to stop at their hastily constructed stalls. I’m disappointed that this was my only chance to see Naples, since I know the city has a lot more to offer than 50-cent key chains and calculators from the 1990s and craftily recycled magazines. And anyway, we were exhausted and eager to return to Rome.

The next morning we had to get up incredibly early once more, to get on a train destined for the beautiful city of canals and narrow streets – Venice.