Mink, Adrian and I arrived back from a lovely weekend in Serbia on Monday afternoon (the details of which are to come). Mink and I are in shock that we only have a few days left to make the most of living in Vienna – this month has passed by so quickly! So, when Mathis gave us a call and said he’d just gotten back into the city from work, and the bus had dropped him off by our apartment, we decided to meet him for an impromptu Monday night pub crawl in the 10th district. 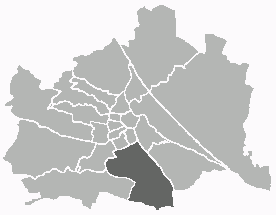 The tenth district, Favoriten, has a lot of character but it’s often looked down upon by our friends as being the “sketchy” district. We live right at the top part of the district, about a 10-minute tram ride from the center of the city, but we weren’t sure what the nightlife would be like in these parts. We’ve never had any problems there, but we thought having a 6-foot-5 guy with us on our pub crawl might dissuade anyone from causing trouble.

Our route took us up Laxenburgerstrasse, which is the street our bus takes to get to Laxenburg (go figure). It was a rainy, cold night for the end of July (come on, Vienna!) and the streets were basically empty at 10 p.m., but the bars were still impressively full for such a quiet night.

We stopped in at a place that didn’t seem to have a name other than “1 Euro Café,” which sounded appropriate for our budgets. We sat at a booth with questionable leather seats. Cigarette smoke filled the air (not uncommon in Vienna). The sole waitress was tiny and had orange cornrows stretching down her back, and she adeptly divided her time between chatting with her customers, pouring beer on tap for everyone, and making grilled cheese sandwiches in the back room. The beer was indeed cheap at 2.50 per half-liter. The company consisted of a number of middle-aged men enjoying a beer and a few older ladies, and the music was a mixed bag of German rap and Madonna, oddly enough.

Our second stop was The Foggy Dew, an Irish Pub that was completely typical in both name and decor of Irish Pubs throughout the world. This pub was also surprisingly full of an older but boisterous crowd, and they were playing WWF on the TVs – this stuff is akin to a disgusting reality TV show that you just can’t seem to turn away from.

Third on the list was the Big Ben, which we wanted to go to simply for the name (naturally). The owner was just about to close up when we got there, but he graciously allowed us one round. Big Ben is tiny but not shady looking at all. We sat in another booth with questionable upholstery and enjoyed the club hits mix pumping through the place (although it was only the three of us and the owner and his friend in the place) while we drank our Weiselburger beer. I’m going to miss this beer.

The owner was on the verge of kicking us out, since it was already 1 a.m., when he asked where we’re from. He apparently loves Canada, and had been to St. John and Halifax and Vancouver on various cruise ships on which he works as a chef. We ended up having a great chat with him and his wife, who are from Austria/Australia and Peru, respectively.

We left to let them close up shop, and meandered onto a side street into Café S’Mausloch (which apparently means “mouse hole” in German) for one last beer on a whim of Mink’s. This was where all of the end-of-the-nighters were hanging out, and there were about 10 others in this truly tiny hole of a place. A plump, bespectacled woman greeted us at the door and, while she liked Mink and I and said we could stay for a beer, she tried to kick Mathis out – which we were not going to let happen! We convinced her to let all of us stay for a beer, and the experience was both strange and hilarious.

This woman was clearly wasted, as she kept taking single shot bottles out of her purse and drinking them and then leaving them on the bar – this made the 40-year-old bartender in leopard-print leggings and a sparkly top quite angry, and she let the chubby woman know it. I’m pretty sure she was also hitting on Mink and I, as she made us promise to come to a “White Hot Party” at the bar next Friday. That would have made for an interesting night, to be sure – too bad we’ll both be back in Canada by then!

The other patrons were no less fascinating. There was a corpulent, mustachioed man who was wearing suspenders to keep up his shorts and kept glaring at Mathis and saying things in German (probably something racist, but I don’t want to draw unfounded conclusions). He left in a bit of a huff. There were also two normalish-looking guys in their thirties who were really into choosing songs on the jukebox, and another fat man dressed in full leather biker gear falling asleep at the bar but still managing to sing along to every song, whether it was in German or English. A dapper man in his fifties with a sweater tied around his neck sauntered in with a small, very hairy man in a small t-shirt who started dancing around the bar energetically and raising his shirt every so often, apparently for the sheer joy of it all. Finally, our two friends from Big Ben came in for a last drink before bed, so we had a lovely reunion. The drunk woman greeted the Peruvian especially warmly, since she is, after all, very cute.

As funny as this all was, we didn’t linger over our beers, and said goodbye to the S’Mausloch around 2 a.m.

And that, in a nutshell, is the magic of the nightlife in the tenth district!