For this post, “Summer in the City” by The Lovin’ Spoonful seems an appropriate tune – it really is hotter than a match head in Vienna these days!

Bryno, Mink, Peter and I went to the Prater in the afternoon to go on some rides. Bryno is from Montreal, so he knows about the awesomeness that is La Ronde – I don’t think I’ve ever been to an amusement park with so many terrifying roller coasters (in the best possible way, of course). But the Prater is a commendable park as well, and although it doesn’t have as many roller coasters, it definitely has its share of terror-inducing machinery. Bryno and I started things off right by getting on something called the “Black Mamba,” which basically flung us around upside down, really high, for what seemed like an eternity. (The giant snake statue only added to the terror!)

We went on a couple of other rides of the spinny sort, which tend to make me motion sick. The highlight, though, was the giant swing ride! This seems like a lazy swing through the air, with a great view of the city. However, it sped up a lot as we were returning back to earth – Mink and I had a grand time. Sometimes an afternoon of being terrified for your life (and knowing that you’ve chosen this terror/pleasure for yourself) is cathartic – my throat was raw from screaming by the end of the day. The killer ride was called Extasy, and it consisted of a long time of spinning on the ground, and then sideways, and then completely upside down. That one did Bryno and I in, and we had to spend some time lying in the grass recuperating before being able to walk away from the Prater. Damn you, Extasy!

Christie and Tiffany arrived from Munich in the early evening, which officially turned our apartment into a hostel. We made fajitas for dinner and then went on a bar crawl around the city! First we tried to go to Luft Bar, which was the wrong bar anyway, due to my increasingly impaired hearing skills (thanks, concerts!), but it was closed. This is unfortunate, since Mink and I went there once with a bunch of randoms from New Zealand and Canada and it was very small and charming and full of graffiti. We then got to the right place, which was called Look Bar. This was full of dudes with gel-slicked hair and strong cologne and shirts with a couple of buttons undone; you know the type. Creepy. Next we went to Coyote, a grungy rock bar that is only accessed by a sketchy staircase and was full of older rock-type dudes — it had the exact opposite feel of Look Bar. The bar’s main draw for us has been the whole Coyote Ugly factor. I promised I’d dance on the bar if they played a song from that movie, but thankfully they didn’t have the soundtrack (why do I make these foolish promises so frequently?). The ladies had an especially great time because the bartender was clearly hitting on Peter and Bryno the whole night.

We ended up at Magazin, where the bartender mistakenly called us Americans (until I corrected him) and took our song requests without batting an eyelash. Our last stop was random bar called Bane (or something), which had black shades pulled over the doors and only regulars left chilling in the tiny space. I’d have no idea how to ever find this place by just wandering around Vienna; it’s on one of myriad narrow cobblestone streets in the first district. We got home at 5 a.m., four bars later.

Our group started the day out right with falafel and kebap sandwiches at Shababa near Schwedenplatz (go if you have the chance, seriously!) and then had an extensive walking tour around the first district to see the main sights and statues. We eventually got to the Rathaus, which is currently hosting an outdoor film festival with a bunch of different foods and such. I tried johannesbeer radler (radler is beer with lemonade usually; this was black currant – and a little too sweet for my taste) and a cheesy pretzel.

As the light faded and Bryno tried some of the amazing ice cream that is such a huge part of summer culture in this city, we walked along the along Donaucanal to look at the graffiti and the artists who set up camp along the canal for the summer and make carvings. We set up camp at a beach bar along the canal (I think it’s the Hermann Beach Bar), which had imported sand and beach chairs and everything. It was a chill night, but it felt so great to be with good friends, sipping beer in the dark and watching the city lights shifting in tandem with the stars still visible. 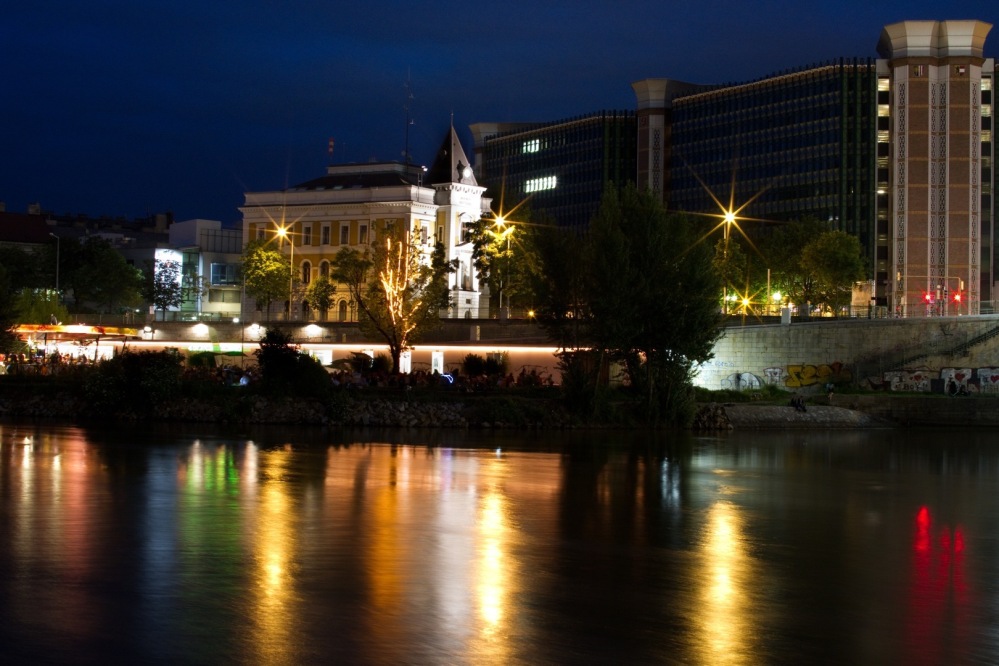 The five of us decided on lunch and radler at the Kleines Café, since Christie and Tiffany’s friend Ryan told them that this was his favourite café in Vienna. 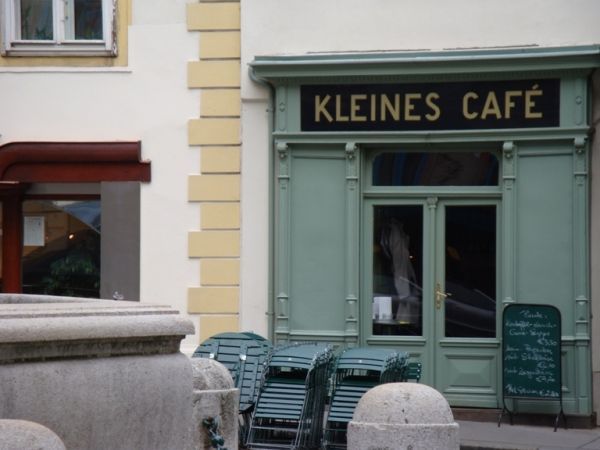 It is Vienna’s smallest coffeehouse, and is situated in Franziskanerplatz across from a lovely church. Apparently it is featured in Before Sunrise, a beautiful and probably grossly underrated movie that I had forgotten was set in Vienna (and I will thus have to watch again). We spent a leisurely few hours in the sun in this square. 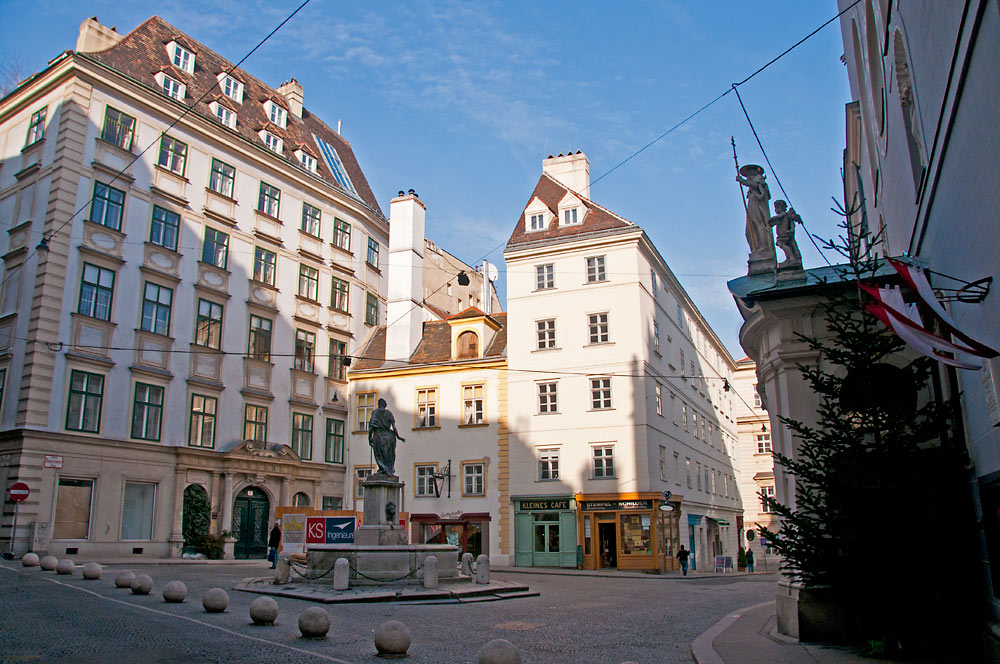 Next we headed to the Donauinsel for another round on the trampolines – Mink and I have graduated to doing flips, and although I have yet to get the landing down, I think we’re definitely showing up the tiny children jumping along with us (take that, tiny children!). We also had a few Coronas to round out an afternoon by the river; it seemed appropriately summery. This island is so cool, and it’s got a completely different vibe than downtown Vienna.

We chilled out at home for a bit and then headed out for some karaoke at Sing Your Song, where we’ve now been quite a few times (creatures of habit, we are). It was pretty busy, it being Friday night, and unfortunately we couldn’t peer pressure everyone into making fools of themselves by singing. Christie, Mink and I sang Lou Bega’s “Mambo #5” though, which I’m going to insist looked like a crowd pleaser from up on stage.

We ended up at a random shisha bar where the hot coal-changing man wore a red velvet vest and a bellydancer charmed the patrons. Mink insisted she had nothing on us, with our few months’ worth of introductory bellydancing lessons, but we didn’t challenge her to a dance-off or anything. The highlight of the night was Bryno’s trip to McDonald’s, since he was rather enamoured with the curry sauce option in Vienna and ended up buying 10 euros’ worth of the stuff — that’s 30 tiny curry sauce packets that he brought home with him to Canada. Ah, culture!

We decided to take advantage of the beautiful day by taking a horse and carriage ride around the first district. This is an extremely touristy and pretty expensive thing to do in Vienna, but the 65-euro fee was split between 5 of us and the route was really lovely.

We waited specifically for the driver with the impressive handlebar moustache and the blue vest and top hat combination, and we were not disappointed – he had perfect English, and he told us all about the buildings I’ve been walking by for the past 9 months and still didn’t know too much about. Vienna is truly a stunning city, and at times I have almost (but never completely) taken that for granted while living here. Being constantly surrounded by such architectural beauty is both visually exhausting and inspiring.

We said goodbye to Christie and Tiffany, as they had a few hours left before their night train to Venice to find souvenirs and pack their things. Then, Mink, Bryno and I headed to the Donau with the intention of renting a paddleboat and traveling lazily down the river in the sweltering heat. As it turns out, this was an extremely popular idea for a Saturday afternoon, and most of the places we asked at had rented all of their boats already. We settled on getting a rowboat in the end, which made Bryno hate life since we naturally made him paddle for a long time. I may have shown him up with my mad rowing skillz, attained by messing around on my dad’s rowing machine as a kid. We stopped a ways up to jump into the river and swim back towards the rental shack – as it’s been +30 degrees here recently, it was lovely to slip through the cool water amongst the ducks and other paddle-boaters, well away from the constant heat of the city.

Bryno, Mink and I returned the boat and met up with Peter, Mathis and Lauren, who had been swimming on the other fork of the river just a ways up from where we’d been. We stopped at Shebeen’s for some burgers and beer, making it through the door just as giant raindrops began splashing down on us. This was the first time I’d been to Shebeen’s, and it’s a charming (albeit quite dark) bar with epicly large burgers. Apparently it also has great live music during the week, so I’d like to go back there if we have time.

We all felt sleepy after the day of sun and all of that meat and cheese, so we headed to Peter’s a few blocks away for some beer and a chill night of card playing – the first chill night in a week, it seems.

The next morning I took Bryno to the airport train (7:30 a.m. heralded a bit of a rough start) to say goodbye – he had an 18-hour trip ahead of him, and work Monday morning, so I was not jealous at all! After a looooong nap to beat the heat and my built-up exhaustion, Mink and I met Mathis, Peter, Heitham and David at Museumsquartier for some people-watching and lounging on those couch-things they have there. Although it was a Sunday night, the place was packed with people doing the same thing – I love summers in cities, they really come alive!

And that sums up the past week, in so many words. Mink and I are off on our next adventure to Prague this afternoon!