A little music from Flying Lotus to set the tone for The Hague:

We woke up at Matt’s house around 1 p.m., still completely exhausted from our Amsterdam adventure. Regardless, we decided to wander around The Hague for the afternoon since it’s a really pretty city.

An unexpectedly awesome surprise was Matt’s car, which is a 40-year-old green Volvo – we felt pretty cool cruising around in it.

We wandered down a main street of Den Haag, which had some strange sculptures lining the walkway and, of course, the ever-present knell of bicycle bells. I liked the windows on this austere looking building:

It was a cloudy, somewhat cool day that threatened rain, but it was still lovely to eat apple pancakes with syrup and powdered sugar in an outdoor square and listen to the live entertainment being offered for the Jazz Festival. Incredibly, Mink was still wearing the hat! It suits her rather well:

After brunch, we found our way to an outdoor market and checked out the Dutch book selection. We also tried some deep-fried fish, and Peter took a chance by eating a herring the way the Dutch do – straight down the gullet. I tried a little bit, and it wasn’t too bad, but I definitely wasn’t down with that particular eating process. He’s braver than I am.

There are many excellent features of Dutch architecture – not that I profess to know anything about Dutch architecture, or any architecture, for that matter – and a great element is the wooden shutters on many of the older buildings. Tiny red shutters! (This photo may have actually been taken in Amsterdam.) 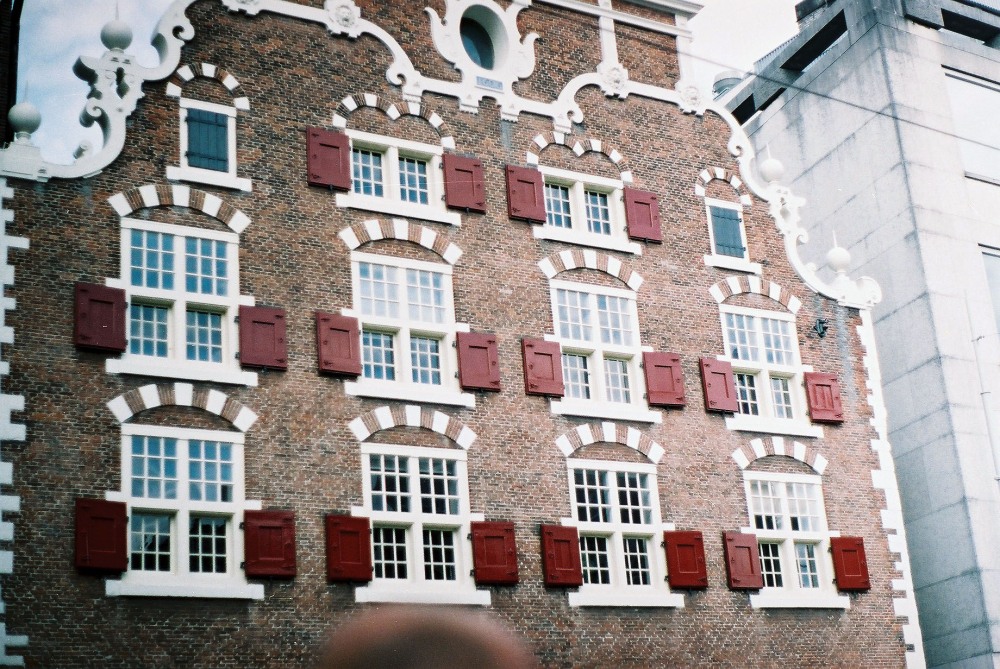 I took a photo of this ladybug/ladybird street art because it struck me as a simple and charming image, but then Matt told us it’s a symbol that’s used to mark where a senseless act of violence has occurred, making that spot into a sort of memorial. Intriguing idea. (More on this movement, and the Dutch National Foundation Against Senseless Violence, in this speech.)

We also unexpectedly came across the Escher Museum, which I would have liked to venture into if we’d had more time.

M.C. Escher is famous for works such as this one:

And he seems like a very intense sort of character to learn more about. Perhaps next time I randomly end up spending a few hours in The Hague? Ha.

We ended our tour with the train station, said goodbye to Matt, and caught the 17:30 train back to Brussels, exhausted but pleased with our whirlwind tour of The Netherlands. I’m definitely going to miss Matt’s car, too.

The evening in Brussels was another event in itself, and as I have half a roll of film dedicated to that, I’ll wait to write about it. I’d love to spend more time in The Netherlands – I feel like I’ve barely grazed the surface of seeing what this country is like…