Five straight days of working at the bar later, I now have a lovely four-day weekend during which I can catch up on my late posts and explore some more of Vienna. Not surprisingly, it turns out that working at a bar and running around for eight hours straight is really exhausting, and I never want to do anything creative afterwards.

Accompanying my account of our trip to Galway is the appropriately “Galway Girl,” by Steve Earle. This song is also somewhat reminiscent of the type of music we heard in the streets of Temple Bar:

Laur and I woke up at 8 a.m. to get ready, misjudged the time and ended up walking very briskly to the bus stop after getting coffee and a muffin for the road. The bus literally left three minutes after we boarded it, so that was fortuitous! It would have been very disappointing if we’d missed it, since I don’t think our tickets were transferable to the next day. We slept for most of the 2.5-hour bus ride, as starting to drink at the Guinness Storehouse the previous afternoon and carrying on late into the night had tired us out. Fun is exhausting!

Galway is an adorable city that reminded us a lot of the Maritimes. It’s on the other side of the island, on the west coast. Living in Canada for most of my life has led me to assume that it normally takes literally a solid week of driving to reach the opposite coast of a county, so it was cool to be able to cross Ireland in mere hours.

We ventured into the Tourist Info building, always our first stop, to pick up some Galway Tourist Trap info. We soon discovered just how small the town is, as we decided to look for Eyre Square and discovered that it was literally a 2-minute walk from the Tourist Centre. And then everything after that was a five- or ten-minute walk from there – an afternoon was definitely enough time to see the town, although it was kind of regrettable that we didn’t stay for a night to experience Galway’s apparently hoppin’ nightlife.

We ate bangers and mash at a cute pub called Flanagan’s, and then popped in to see St. Nicholas Church. We wandered through the Farmer’s Market on Market Street, a tiny winding lane next to the church with little kiosks set up. Crossing over the Salmon Weir Bridge, we entered into Galway Cathedral which was nice enough but utilitarian compared to the ornate French/German/Austrian cathedral architecture, and thus a little disappointing.

As this was on the outskirts of the town, we did the Canal Walk back downtown by the River Corrib, which was beautiful. By that point it was getting a bit cold and windy, but for a place to be that warm and green at the beginning of March I can have no complaints. Again, being Canadian has conditioned me to expect six months of torturously cold and dark weather, and it doesn’t have to be that way! 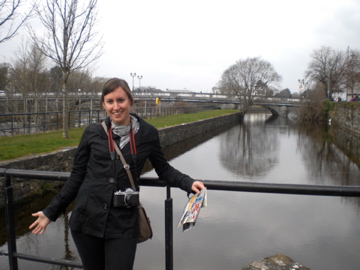 We found our way to The Claddagh, which is the point at which Galway Bar and the Corrib River meet and where ships and lobster boats dock. Here, especially, we were reminded a lot of the Maritimes. There were gaggles of sea birds whirling madly about our heads and crying desolately, rows of coloured houses along the edge of the bay, and the token pile of broken lobster traps teetering precariously in the wind. There were people playing Frisbee or just chilling in the park nearby, and it’s clear that Galway is a very family-oriented place. We sat there for a long time, since it was beautiful. 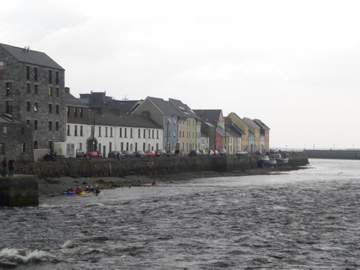 Rousing ourselves to continue our exploration, we finally found the Spanish Arch, for which we’d seen about a million signs but hadn’t been able to find. This another advertised “trip highlight” that wasn’t really a highlight, as it turned out:

Much cuter was the tiny café right underneath the arch, with this dramatic seating area. This table and chairs set up on the shore of Galway Bay made for a strange tableau that was somehow simultaneously enticing and alienating: 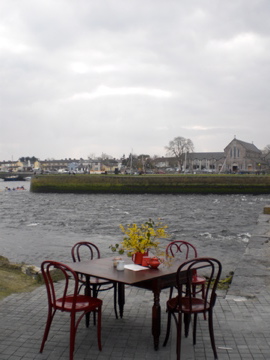 Laur and I walked down Kirwan’s lane, a tiny street with shops, and then stopped for some hot chocolate in a café and to write some postcards. By this point we had to return to the bus station, so we made a stop at Subway for food to fortify us for the bus ride home, and we caught it with plenty of time to spare. Although we’d taken the express bus to Galway, our return trip had us wending our way through the darkening countryside and stopping at about ten or so tiny towns to pick up and drop off people. We had another bus nap for a lot of the trip, but there was an annoying interlude during which a sketchy teen wearing a hoodie got on and sat right in front of us. He proceeded to play loud, terrible rap music on his cell phone for the last 45-minute stretch to Dublin, never playing an entire song and often repeating his favourite one about being addicted to weed. And I’m pretty sure that he was rolling a joint for a lot of this time, too.

We got back to Dublin around 9:30 p.m., ready for another night of fun. I was going to ask Sketchy Teen if we could hang out with him as a joke, but didn’t want to get stabbed for the sake of comedy. We wandered back to Temple Bar, finding The Quay’s Bar for some “traditional Irish music” that seemed to be advertised in every pub. There were two awesome girls singing and playing the fiddle and guitar, and their “Irish music” also included some great covers. A highlight was also the bride-to-be of a hen party, decked out in a hot pink construction vest and veil, singing an impromptu and very spirited rendition of Rihanna’s “Umbrella” when the girls finished their set.

Having had our fill of Irish music for a while, we went into a random bar called The Morgan, which was playing Euro-trashy club hits and filled with the appropriate set of clientele who would appreciate this type of music. The people-watching in these types of venues is always, of course, entertainment in itself. When we finished our cider there, we made a repeat showing at Leo Burdock’s for some more fries because we just naturally seemed to end up there. We enjoyed a pleasant walk home to Marty’s around 3 a.m., exhausted but happy and ready for one last day in Dublin.