My parents are awesome, and for Christmas they bought my siblings and me a flight to Miami, Florida. We went for the last week of February, which was bitterly cold (or so I’m told) in Toronto and Sackville, NB, where the five of us sometimes happen to live.

We rented a condo in a delightful building that was right next to the ocean and also full of old people (the ongoing ocean banter called for “whitecaps” sightings to be a thing). We ate at American restaurants with their American portions, and soaked in the sun as only the Vitamin D-starved Canadians can while the leathery-skinned women glanced pityingly at our milky white shins.

And we did some other things!

Although this first warm day in Toronto and the first day after we sprang (sprung?) forward an hour was promising in its springiness, I know that we have several acres of winter to traverse before we actually feel the sun on much bare skin again. To honour the week in Miami – which now seems but a distant memory as we sink back into work and routine and cold walks to the subway – I offer you a countdown of 10 awesome (and family-friendly!) things to do if you happen to be in southern Florida. 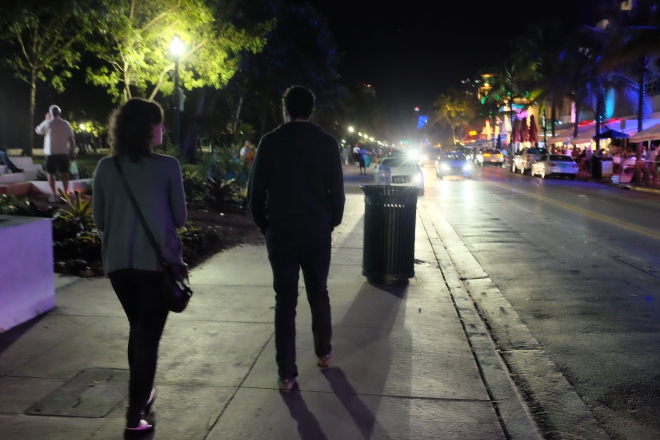 On our first night, we attempted to drive to South Beach – without a map. Turns out those tangles of highways are a little harder to navigate using pure intuition if you’ve never been to a place (or if the last time you were there was four decades ago). We did finally make it there though, and Collins Avenue was neon-hopping-Escalade-cruising-brorific-pumping-energy, as promised by the popular culture references.

We stopped at a random restaurant right on the main drag, watched the people walking by (in shorts! SHORTS!) and ordered a few of these bad boys: 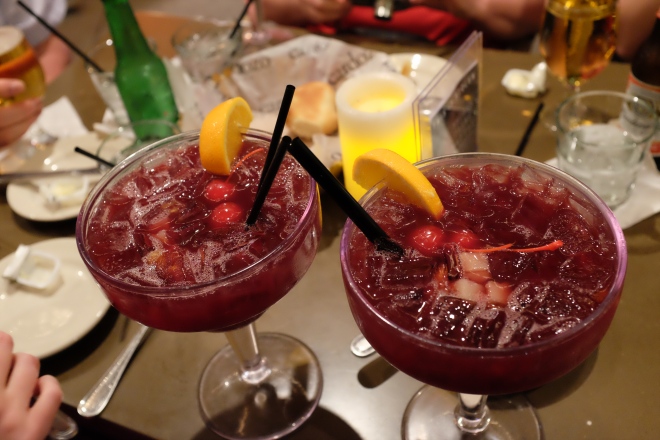 Turns out that these delicious vats of sangria are $18 each. Not surprising, in mildly tipsy hindsight.

After dinner, we walked along the strip, checking out the parties on one side and the people drinking beer by the beach in the dark on the other. There were quaint hotels and old-timey cars and people dancing to music blasting all over the place.

If you’re into the party scene, apparently this is the place to be. We walked by The Clevelander, an iconic Miami Beach hotel, which was bursting at the seams with the young and beautiful (and they were synchronously dressed in pristine white, naturally). 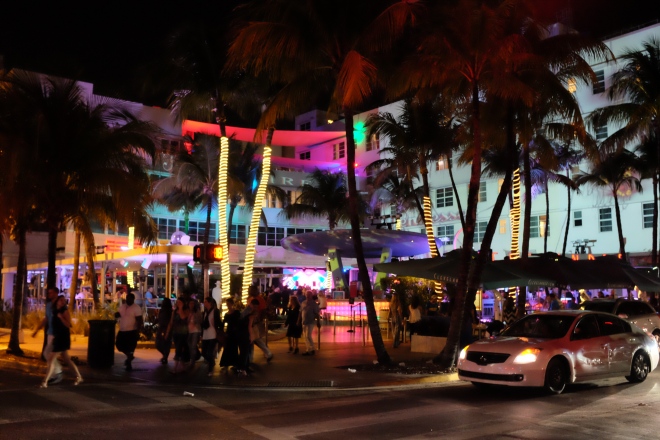 If that’s not quite up to your sophisticated standards, there were many other boutique hotels lining the sidewalk during our harrowing journey to find gelato. Laur was partial to this one:

As with all cities worth their salt, there was a decent amount of street art, even if it was hidden discretely in the nooks and corners of this particular neighbourhood:

And yes, for those of you who’ve been holding your breaths – we found the gelato. I got coconut and it was delicious, including the weird chunky coconut flakes (haters gonna hate!).

I should note that these awesome things are chronologically listed and not ordered in terms of their awesomeness – obviously the best thing on this list is the gators. And the pelicans.