Who: The Knife and DEEP Aerobics
What: Matching jumpsuits. Homemade instruments. Glitter makeup. Everything that is awesome.
Where: Kool Haus, 132 Queens Quay East
Price: $35
Bonus: You exist, and can say you saw The Knife

If you’re curious already, listen to their second single from Shaking the Habitual (2013), “A Tooth for an Eye”:

On Friday evening, after a work social, I made my way through the rain and the traffic to meet up with Simon to see a concert we’d been anticipating for months. Perhaps unsurprisingly, no one from work that I talked to about this concert had heard of the eccentric Swedish duo except for the guy with Swedish ties. A weird, wonderful, and always unpredictable band – maybe not the most obvious choice for one’s regular Friday night goings-on, but it was a sold out show and the crowd was as thirsty for oddness as we were.

DEEP Aerobics – that stands for Death Electric Emo Protest Aerobics, for the uninitiated – is the work of the disarmingly charming Miguel Gutierrez (who is probably not? Zack Galifianakis). He didn’t play any instruments or sing. Rather, he jumped around on stage and invited us to stretch, do some calisthenics, and get prepared for the spectacle ahead. This prep also involved saying hello to our audience neighbours, and then later acknowledging their ability to not trample us as we were all hopping like bunnies to the left and to the right.

It’s a little scary what a bearded person wearing a long, brown wig, a pink flowered robe, and a ton of eye glitter can make a crowd of hundreds do with the right inflection and some enthusiastic arm movements. I was digging the crowd camaraderie, but I can see how these types of events might devolve quickly into mob-mentality shenanigans.

The Knife is Swedish sister/brother power team Karin Dreijer Andersson and Olof Dreijer. I fell in love with their magnificent 2003 album, Deep Cuts, and Karin’s solo project, the equally odd Fever Ray. In the photos for their most recent album reviews, they look positively light-hearted – buoyantly carefree compared to some of The Knife’s earlier, darker iterations:

The Knife’s newest album, Shaking the Habitual, is not an easy listen, and it is clearly not meant to be. Long parts of it are jarring and uncomfortable and hit a little too close to home – like a drunk friend earnestly expounding on the reasons why you’ll probably always be alone – but it’s still awesome. They use found sounds, play weirdo instruments, sing lyrics that cut to the heart of the matter, and somehow create torturous, dissonant songs like “Fracking Fluid Injection.” And that shit’s a big deal.

Based on their album manifesto (which is called “Some Feeling in the Bellies of the Tankers Who Pass Us Making Sad Manic Bongs Like Drums”), I knew that the show for Shaking the Habitual was not going to be a run-of-the-mill concert, but a genuine sensory-overload experience.

First: pitch black stage. A blinding light shone directly into the audience, and a commanding woman with a long braid strode towards us, banging her drum: 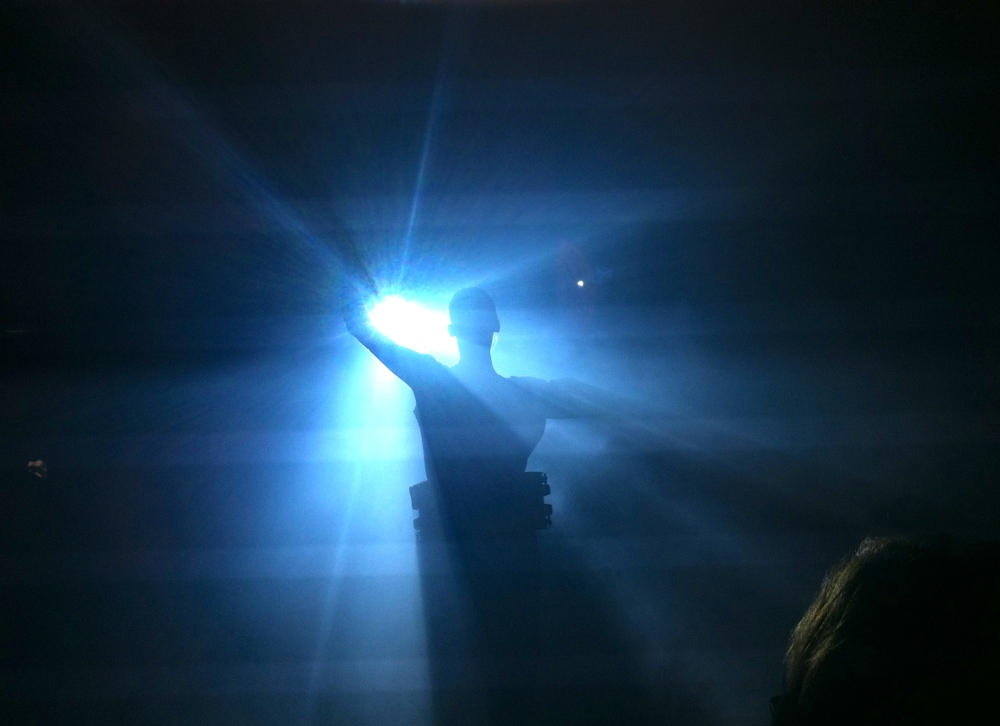 As more lights flickered on, we saw eleven people spread across the stage, with slicked-back hair and matching homemade jumpsuits in jewel tones and glitter eye makeup that would gradually melt down their faces as they sweat through their dance moves. It was the most epic: 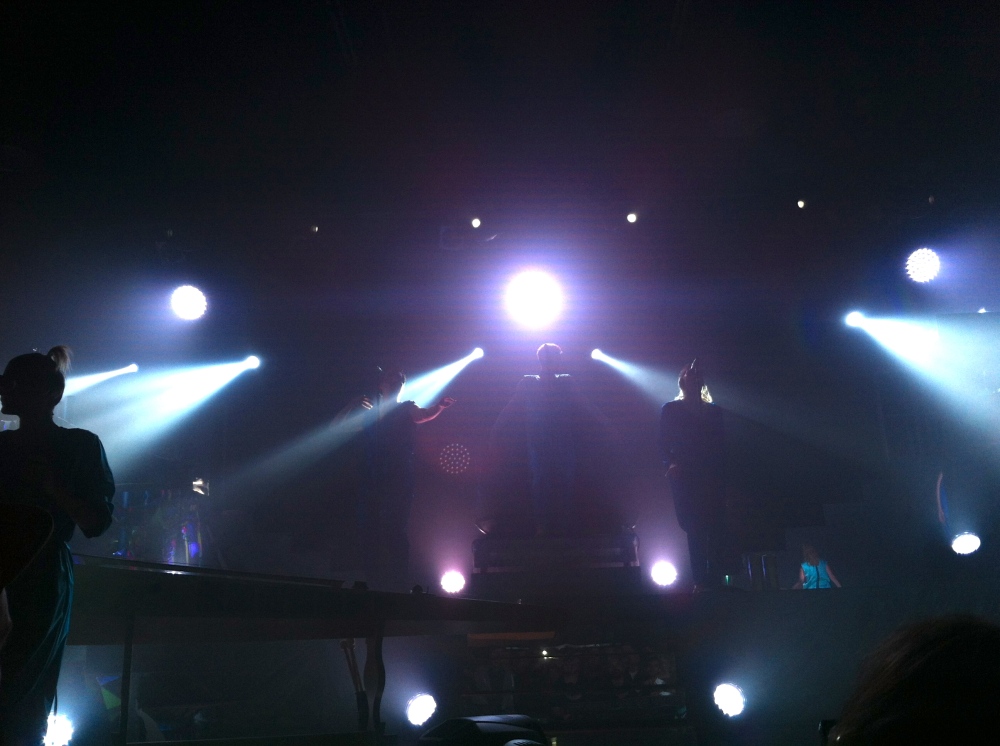 There was a large stringed instrument that a (Canadian!) woman in a purple jumpsuit played with graceful aplomb. A woman in a green jumpsuit with the tiniest ponytail ever and painted, pointed elfin features played a woodwind type instrument as she strutted to the front of the stage. A shy-looking man grinned through the blue makeup streaming down his face. A woman recited a friend’s poem about her body being free to love whomever it wants.

And did they ever dance! They crept and spun and writhed and gyrated and looked menacing and then sad and then laughed like they were having the best night of their lives – and often all in the course of one song. If you want more visuals, here’s a video of “Raging Lung” from an older show. They seemed a lot happier in Toronto as they sang exuberantly, in perfect unison, “Without you, my life would be boring!”

All I could do was turn around to Simon and yell, “This is the best thing that has ever happened!” 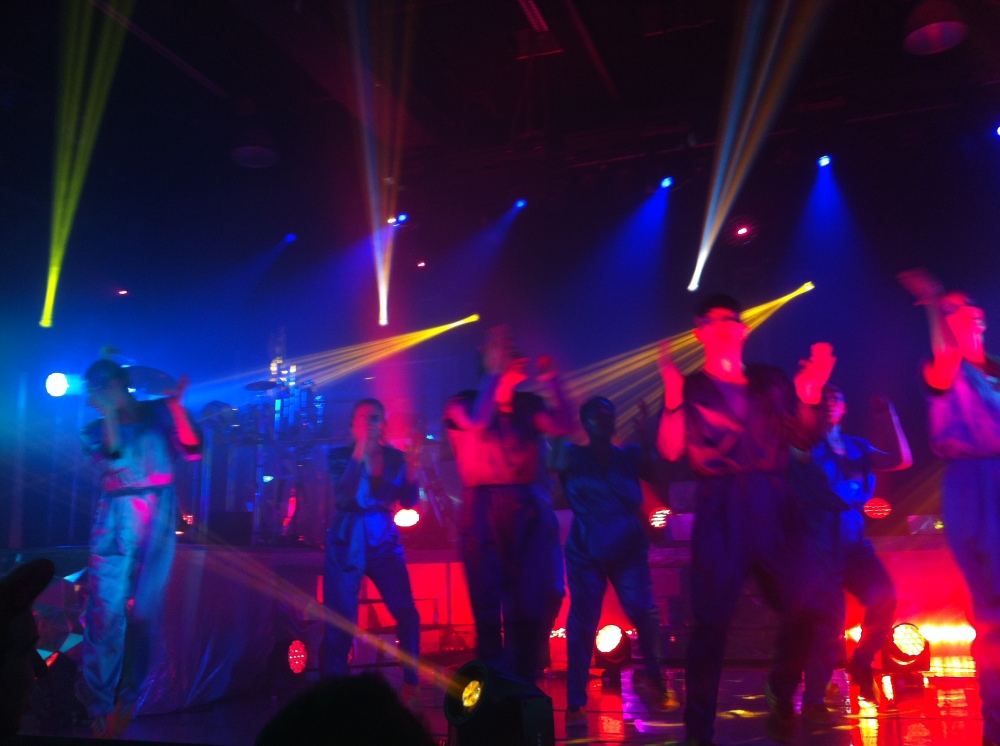 The show was a clown car packed with delicious nightmares. A kindergarten class on acid. A theatre class at a liberal arts school with unlimited funding. Probably a regular Tuesday evening for Rob Ford’s overstimulated brain.

And if The Knife came back to perform another show next week, I’d be there in a heartbeat.