I loved eating Zoodles as a kid. Except when the noodle animals came up on my spoon broken or disfigured; that experience was quite traumatizing… but I was a wimp. I digress.

On Sunday Minkus, Mathis and I hit the zoo, since it was a balmy 18 degrees in Vienna and the zoo is a magical place, even for mid-20s kids who have no kids themselves. If I ever have kids, I’m totally taking them to the zoo all the time. Yes, this might be a selfish plan, but not being judged harshly by people who bring their children to the zoo for not having one’s own kids is pretty much the #1 benefit to having kids, amirite?

The Schönbrunn Zoo is considered the world’s oldest zoo, since it was a menagerie commissioned by Emperor Franz Stephan in 1752. It was just voted “Best European Zoo 2010,” for which it apparently received its trophy yesterday. I wasn’t even aware that zoos could get trophies, but there you have it.

Like pretty much everything in Vienna, the area around Tiergarten Schönbrunn contains beautiful architecture and carefully landscaped grounds. The Emperor’s Pavilion, built 240 years ago, is right by the zoo – you can hang out where the Emperor used to have breakfast, no big deal.

We neglected to go into the pavilion, though, since the zoo was closing at 5:30 and we only had a few hours to explore. I was actually more impressed with the greenhouse’s architecture, anyway:

Upon arriving at Schönbrunn, we first consumed our pre-zoo beers (Note: these were actually just regular old Gössers, but they were instrumental in building an anticipatory energy for a Sunday afternoon adventure after our late night out on Saturday). Then we entered the magical world that is the zoo – although some of the enclosures seemed a bit small for the animals, one must take into account that it is still not that warm out, and it was cloudy by that point. The animals were still mostly in their winter habitats, which were, for the most part, equivalent to barns.

Some of the highlights were as follows (all photos for this post were taken haphazardly from the internet, everyone’s source for everything these days): 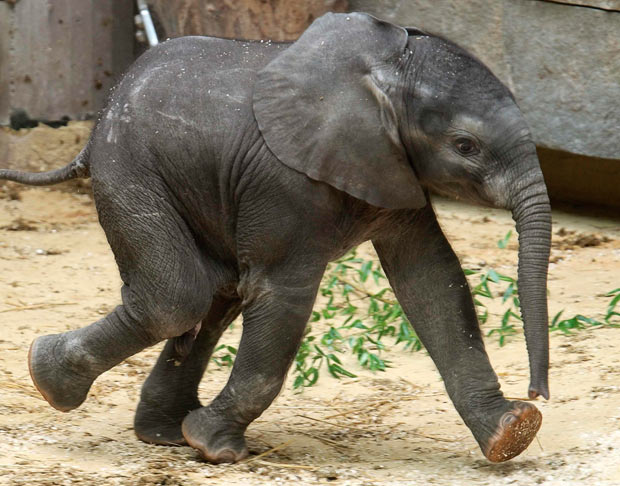 As hoped for, we were treated to a close-up view of Tuluba, the elephant that was born at Vienna Zoo on August 6, 2010. For a thing that’s only been alive for a few months, a baby elephant is impressively huge!

We also liked the various monkey enclosures, although they seemed a little cold and weren’t playing very much. Most of them were staring indifferently back out at the people looking in, as is so often the case with zoo animals. I wonder if they’re just thinking that we’re supremely stupid? It made me think of this, from “Married to the Sea”:

The giant pandas were also amusing, mostly because they attacking the greenery in their pens with zeal I haven’t seen since the days of watching football players stock their trays at Meal Hall and sincerely wondering how a human being can eat that much in one sitting. 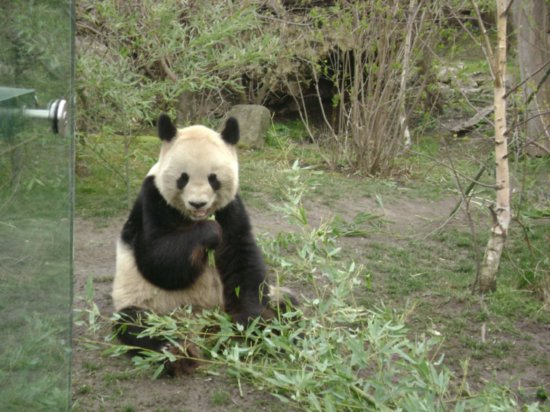 The lions and tigers (and bears, oh my!) were very badass looking, and the lions’ enclosure was set up so that we could walk under the rocks on which they were sitting and see their giant, adorable padded feet. We started the game of asking, “Would this animal kill me instantly if I fell in its pen?” for the big cats. I think the tiger, in particular, could annihilate anyone pretty quickly if it felt like it, even a giant human like Mathis. One would only survive because of the tiger’s easy-zoo-life-induced apathy.

The most awkward moment can be awarded to the male zebra who got a little excited to be playing with the other zebras. We were treated to some uncomfortable close-ups of his nether regions, and all the time the pervy zebra looked something like this: 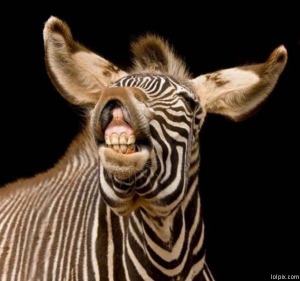 My favourite enclosure was the giraffe barn, since we were extremely close to three giraffes and got to see them eating hay out of ten-foot baskets. And, as everyone knows, giraffes are reallllly weird looking: 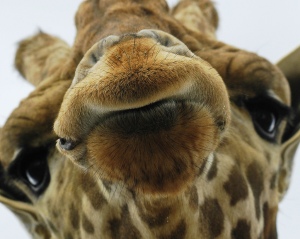 I was reminded repeatedly of Darwin’s theory of evolution, since for so many animals one just has to wonder how they’ve managed to survive with those particular features or traits. Flamingos’ backwards knees. Penguins’ tiny flippers. Elephants’ dextrous trunks. Camels in general. It reminded me of the excellent book I read on my overnight flight to Vienna when I was too excited to sleep, Richard Dawkins’ The Greatest Show on Earth: The Evidence of Evolution (2010). Dawkins is an incredibly engaging and accessible writer, but I’ll be brief with the kudos for his work at the moment.

We concluded our awesome trip to the zoo with another beer and some cheap noodles, which we ate in a park by Schwedenplatz. I’m so excited to be able to wander around in the warmth and loiter in parks after dark again – hopefully spring has come to this city to stay…