Our second stop was Paris, the City of Love – granted, going there in the dead of winter with your family is not what I would define as the most romantic holiday, but it was awesome to get to spend five days and nights exploring the city. Our chosen theme song was “Streets of Paris” by The Teenagers, and we basically sang it to death, because it encompasses the awesomeness bilingually:

One point of interest: trains in Europe are awesome. I know that Canada is just too big and too snow-covered for half of the year to ever hope to achieve this level of efficiency for its own rail system (sorry, VIA Rail!), but it’s hard to resist comparing them.

Our train ride to Paris was relatively uneventful, as the landscape of France speeding by us was swathed in darkness. We got in about an hour late because it was snowing, figured out the metro system, and proceeded to wander around the base of the glittering Eiffel Tower until we found an obscure side street with the Hotel de la Tour d’Eiffel. Our two hotel rooms were –- what’s the word they use to advertise extraordinarily tiny rooms with extraordinarily tiny adjoining bathrooms? Oh right –- cozy. But we made it work. And, who cares about room size when you’re going to be wandering around Paris every day?

We found a cute crêperie for breakfast, and then took a 2-hour bus tour from the Eiffel Tower around the city. I usually enjoy wandering around a city to explore it for the first time, but it was freezing and Paris is big, so the bus was an acceptable compromise.

We saw some amazing things, despite the general grey of the day.

Paris in the rain: 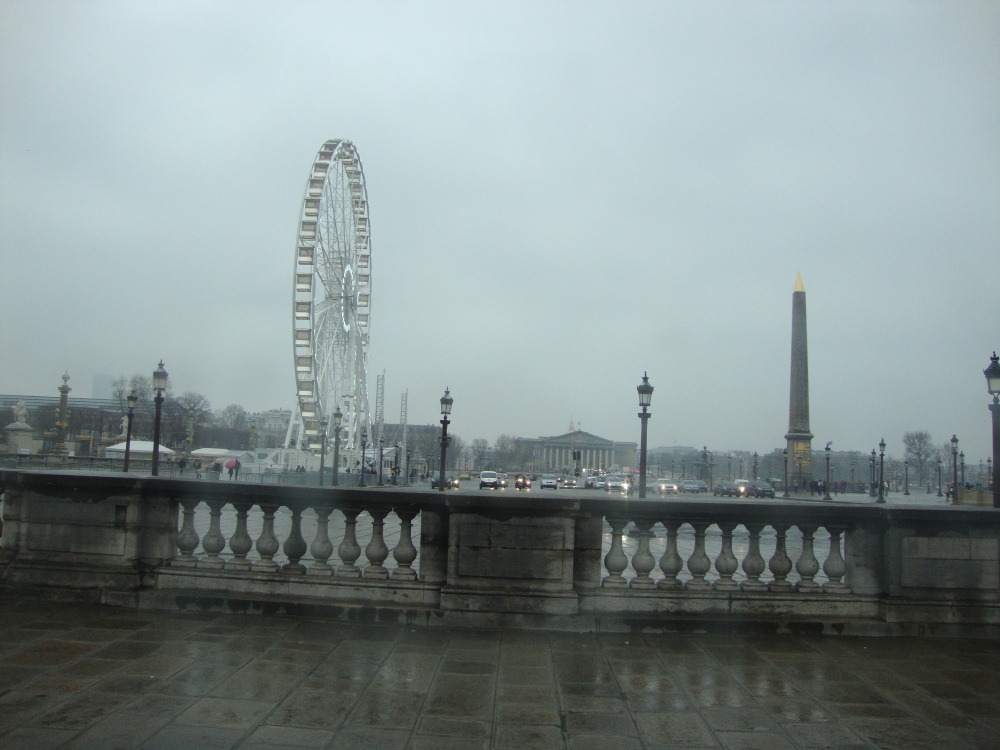 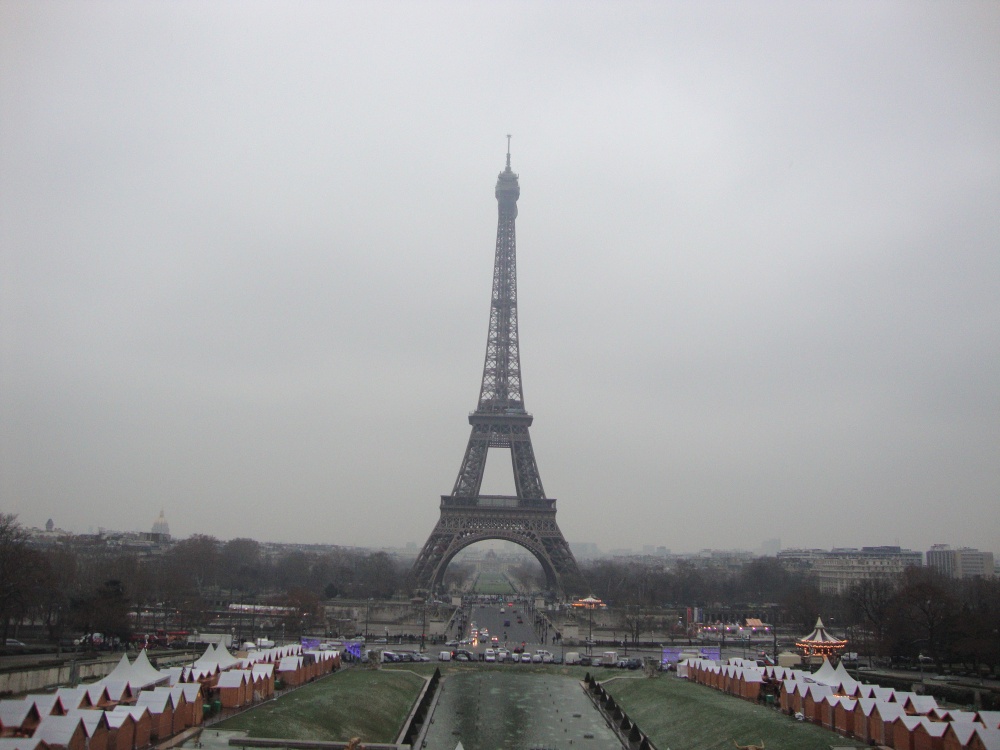 Thoroughly frozen from the breezy busride, we fortified ourselves with some French onion soup near the museums with a nice view of the Tower, and then hopped back on the bus to go to the Louvre for a few hours before it closed. The Louvre in a storm: 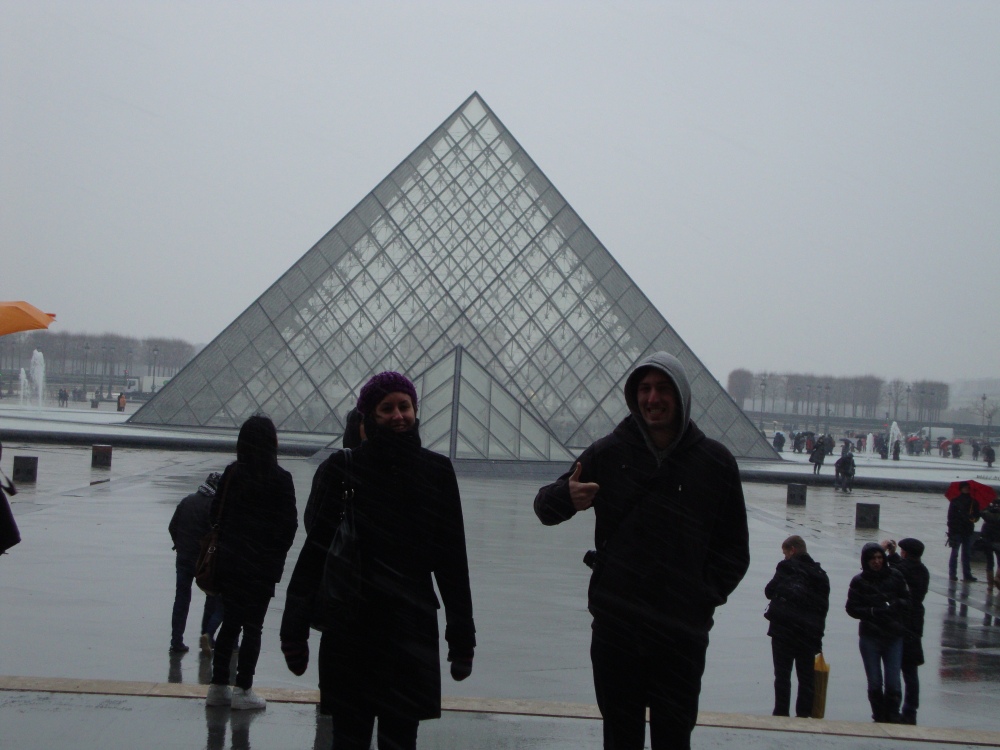 We found a restaurant on Rue Cler in out cute neighbourhood to eat dinner, and then Laur and I went for a beer at a local place before crashing hard.

On Christmas Eve, we took a train to Versailles to see the impressive Palace of the Sun King, Louis XIV. It’s pretty badass: 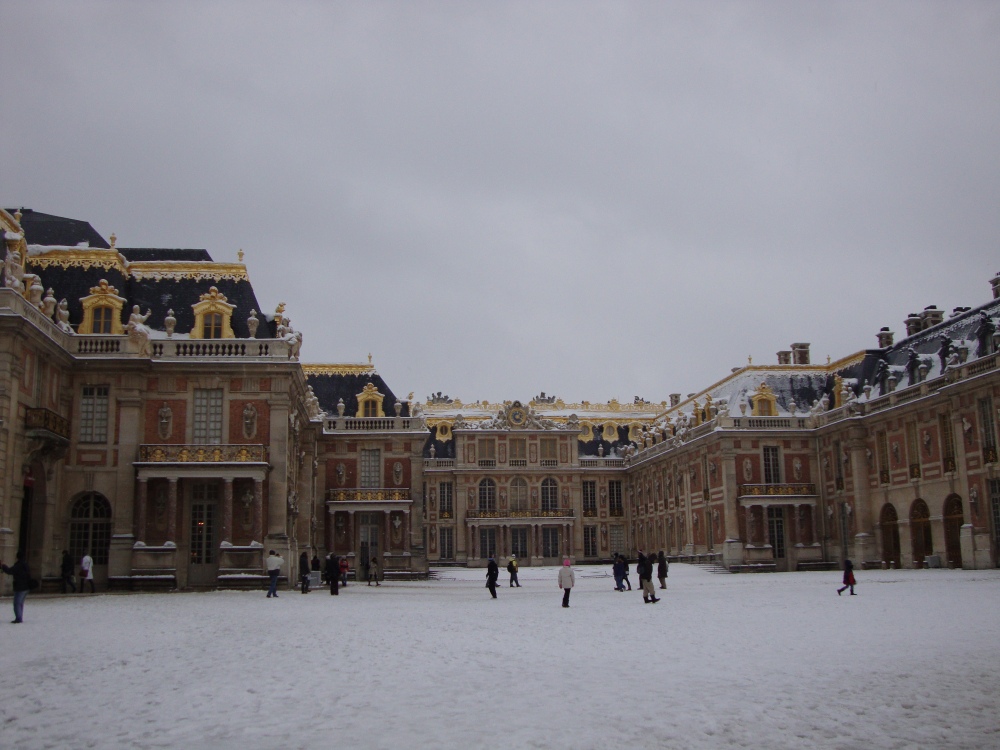 Clearly, dude had a bit of money: 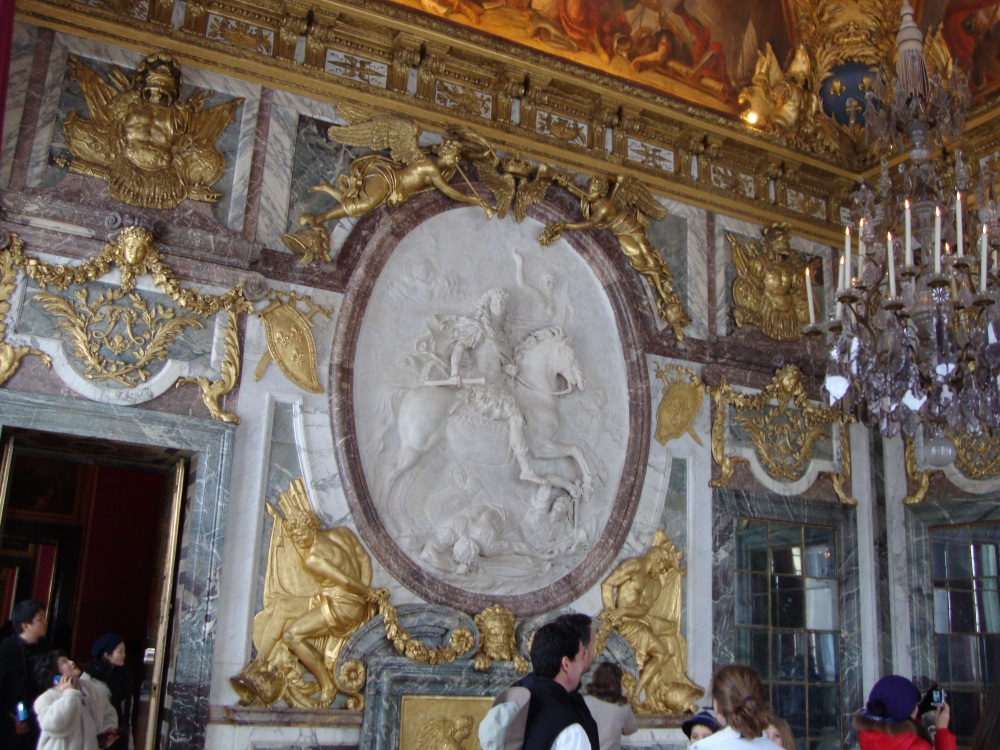 We got back into Paris in late afternoon, where we walked around the Latin Quarter and found the Shakespeare and Co. Bookstore. This is basically the best place ever, and I would love to work there! Books are like crack to me. Look at that grin: 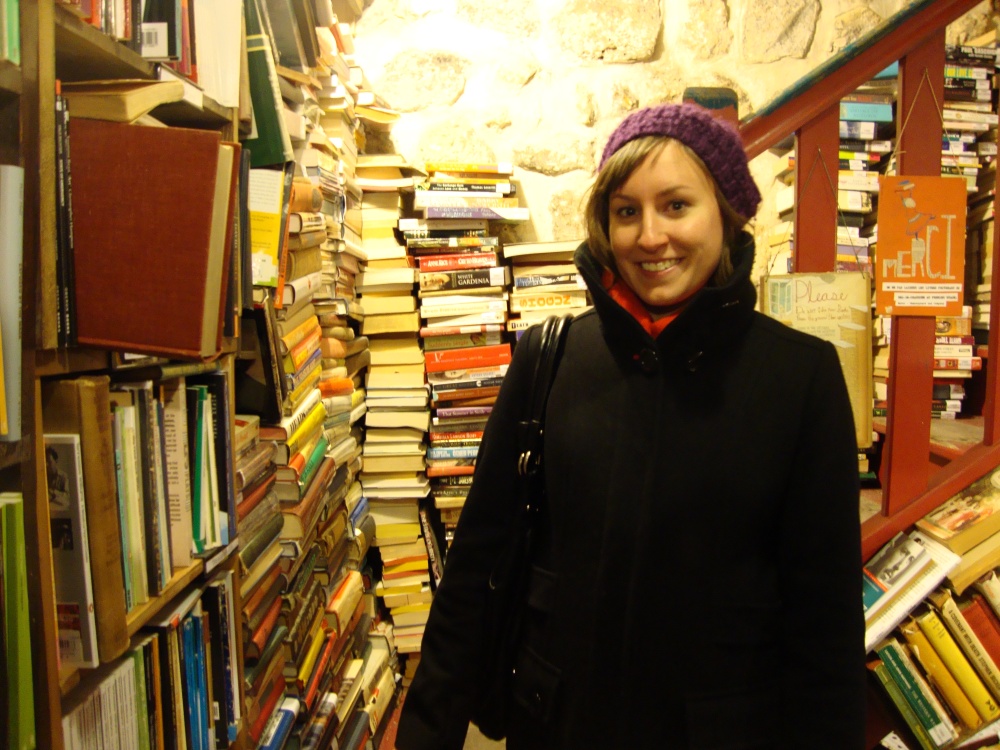 We had a lovely French dinner in the Latin Quarter and then filed into the Cathédrale Notre-Dame along with 10,000 other people for the 8 pm mass. This church is amazing anyway, but it is even more impressive to think that 10,000 people crammed in to hear this one service. And, there was another one starting right after ours, and there were presumably another 10,000 coming to hear that. 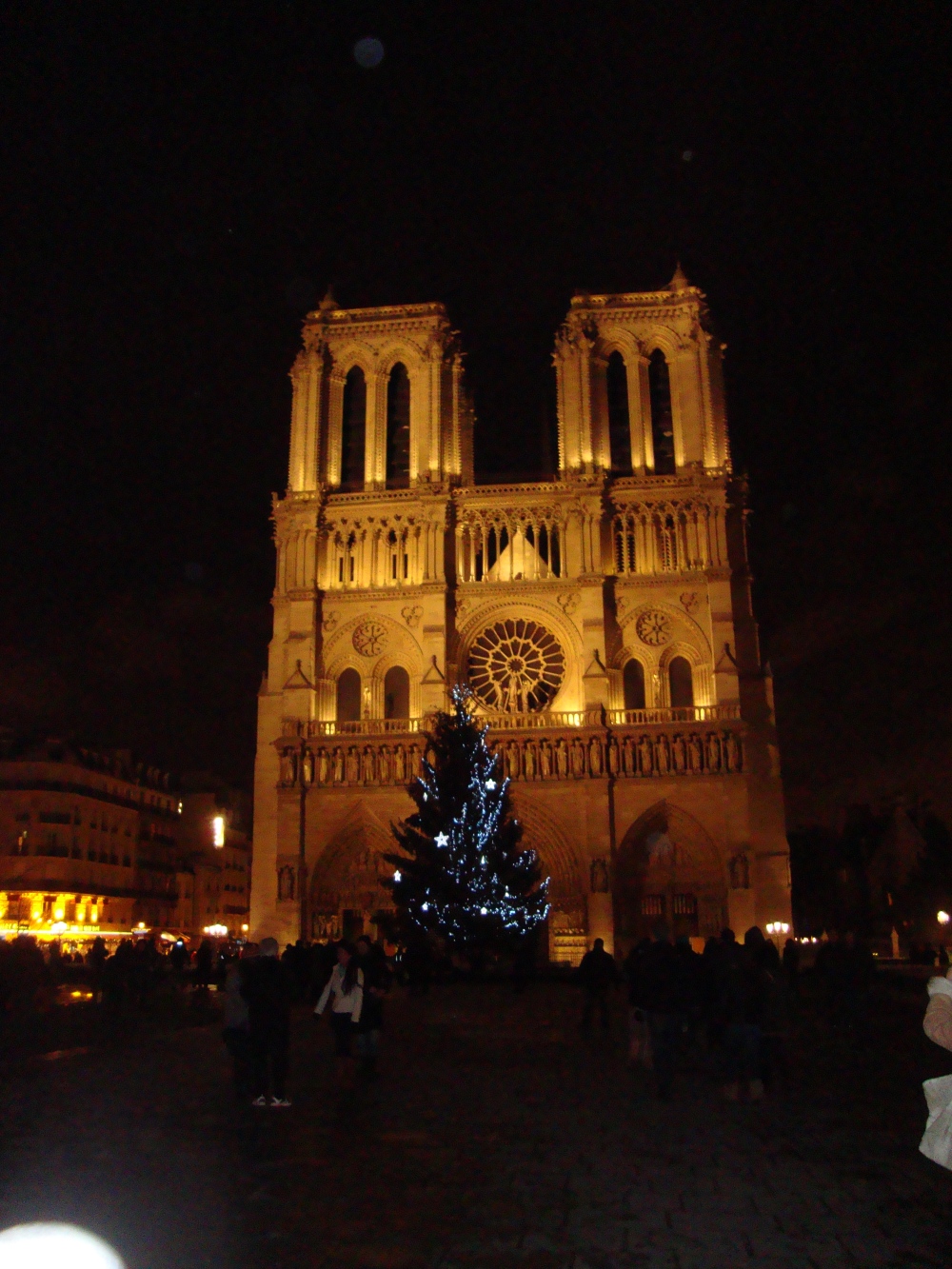 I didn’t understand all of the French during the service, and I’m not really one for church services in general, but listening to the French and Latin hymns was beautiful and it was perfect to see the Cathedral on a night that’s such a big deal for Catholics. We went for a beer afterward in one of the only places we could find that was open to celebrate the fact that we were in Paris on Christmas Eve. We walked home through the cold, abandoned streets.

For Christmas day, we woke up late and opened our stockings that “Santa” had faithfully delivered to our door, our tradition for whenever we’re not at home for the holidays. Braving the myriad street vendors with Eiffel Tower key chains and statues yelling “one euro!” who were creeping like vultures around the base of the monument, we went up the Eiffel Tower and walked around its circumference to see all of Paris. This is obviously tourist destination #1, and it is definitely stunning. Also, this was the first sunny day we’d experienced on the trip, so the view was even more spectacular: 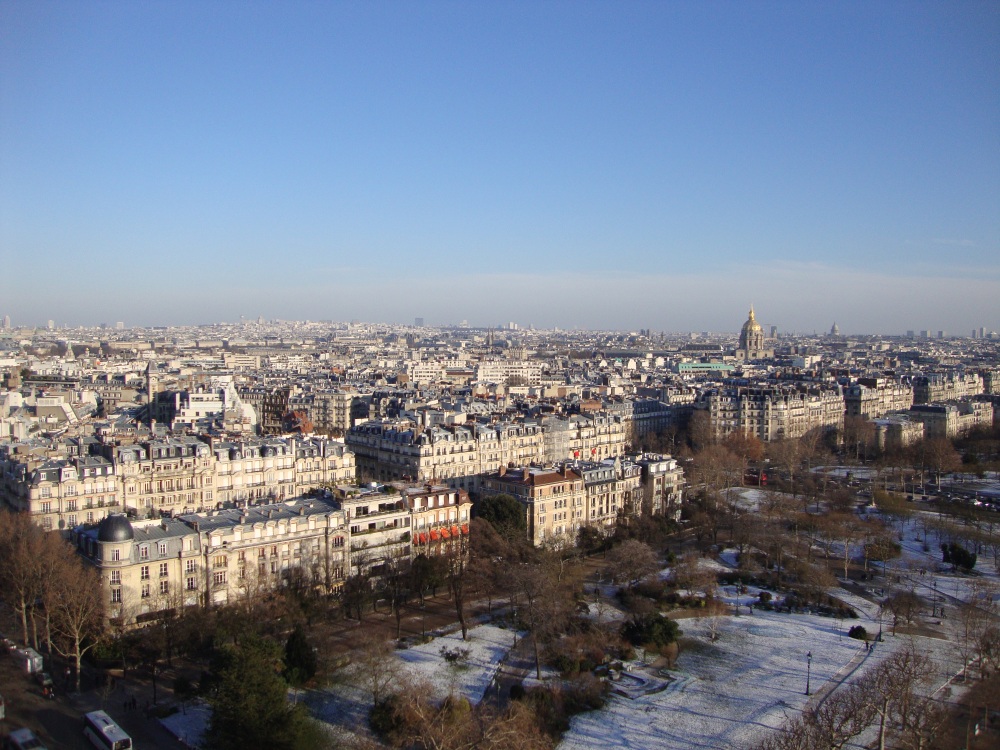 Just as the sun was setting, we went to see the Arc de Triomphe: 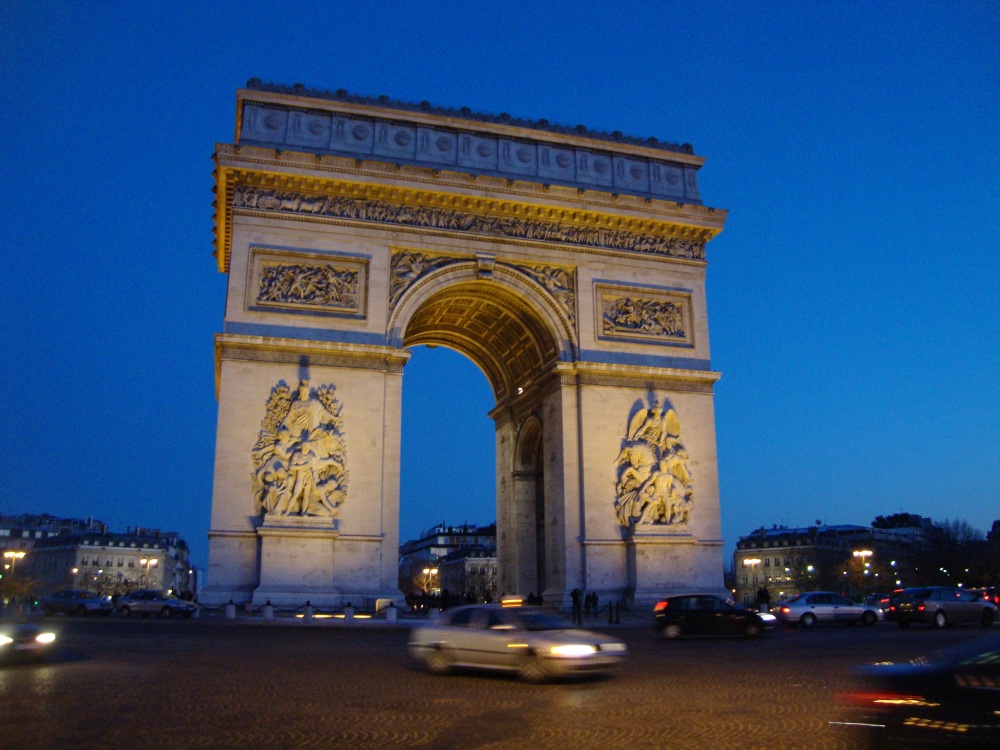 We walked down the famous Champs-Élysées, which was bedecked with Christmas lights (and a little more elegantly than in Strasbourg), and ventured into a cinema for another holiday tradition of seeing a film. We saw The Tourist, a not-terrible movie that reaffirmed my desires to 1) go to Venice and 2) stalk Johnny Depp. I also came across this fantastic street sign, which reaffirmed my everlasting love/loathing for Byron, the club-footed, scandalous poet:

We drank beer in a random brasserie in lieu of a Christmas dinner because we’d all filled up on popcorn, and then chilled in our hotel room, eating chocolate from our stockings and watching CNN, our lone English channel.

Boxing Day was also full of typical touristy stuff, all of it awesome. We ventured to see the Basilique du Sacré-Cœur, yet another stunning building: 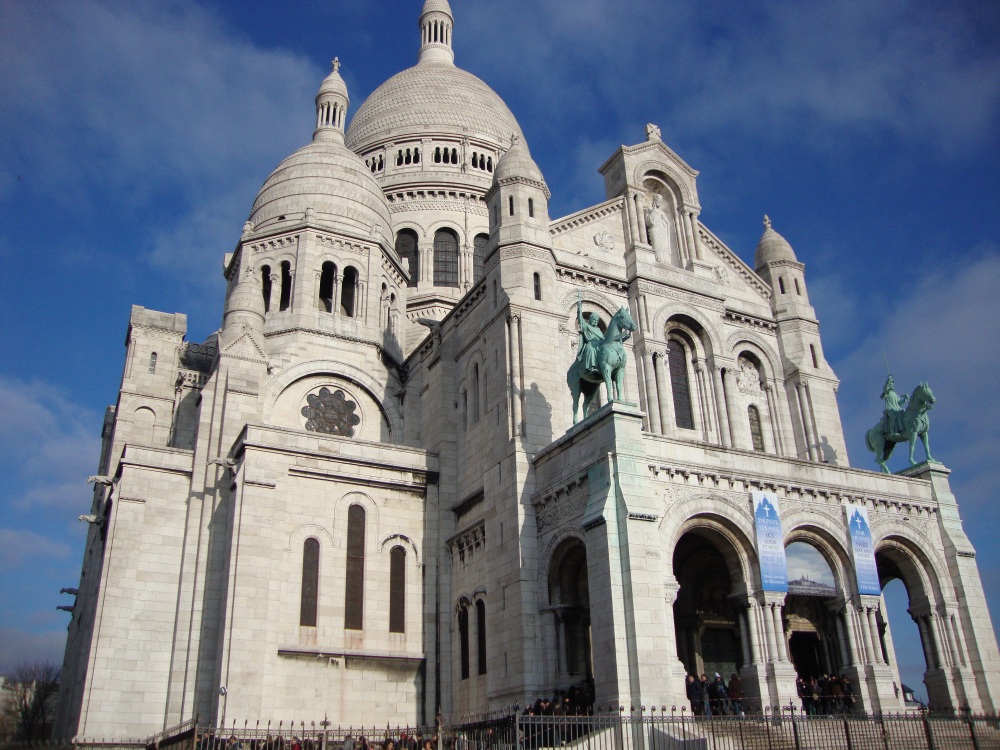 We wandered around the artists’ area of the city, called Monmartre, where famous guys like Picasso, Monet, van Gogh and Dalì used to hang out and be Bohemian and make art. We also went to the Salvador Dalì exhibition, called Espace Dalì, which was one of the highlights of Paris for me. 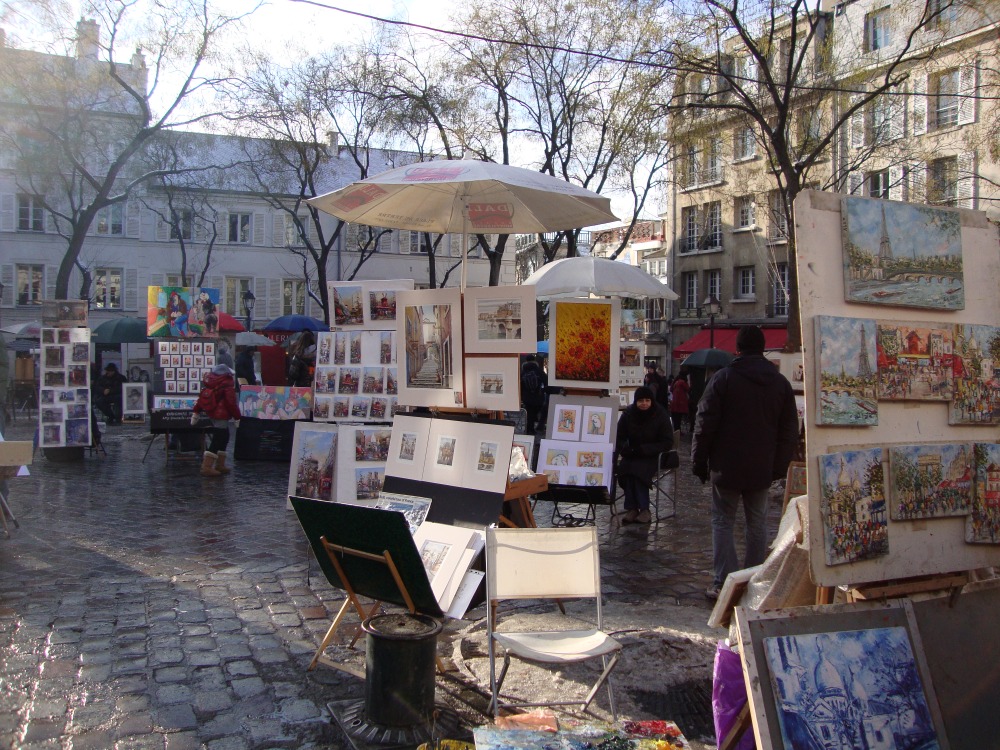 We walked down the sex shop street and saw the Moulin Rouge, which was somewhat less impressive than in my head, thanks to Baz Luhrmann’s interpretation in Moulin Rouge: 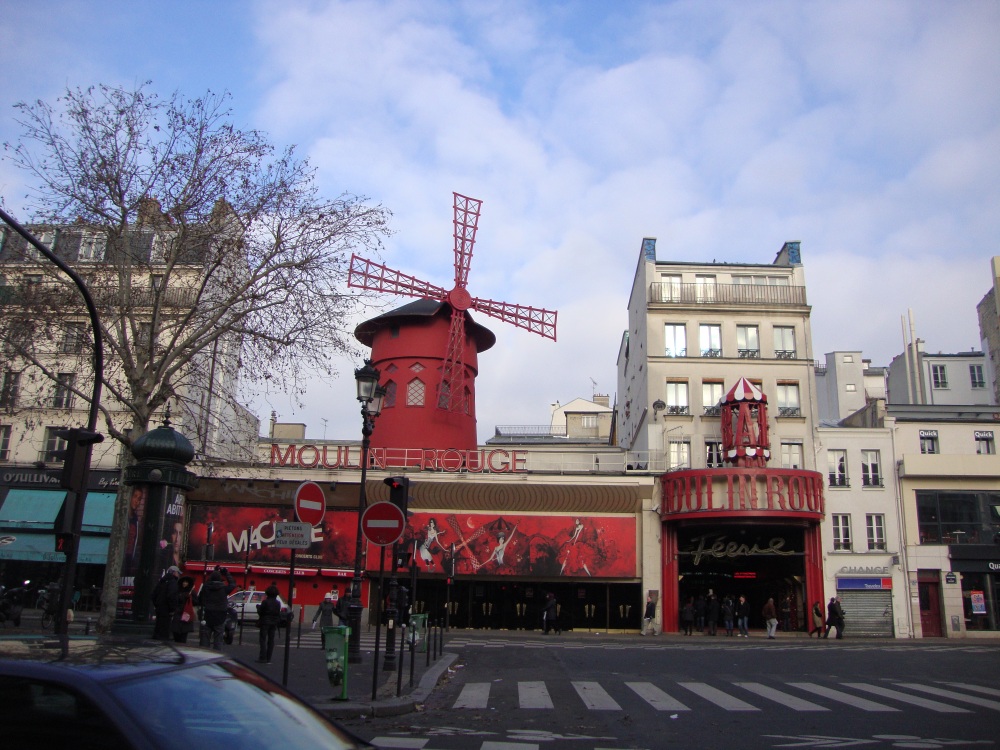 Next, we tried to get into the Père Lachaise Cemetery, the largest graveyard in Paris –- which I was super stoked about, given my fondness for creepy places with dead people in them — but it was closed! This was a huge disappointment, since it’s one of the most-visited cemeteries in the world and tons of famous people are buried there that I have dorky crushes on, like Pierre Bourdieu, Edith Piaf, Jim Morrison and Oscar Wilde. Guess I’ll just have to go back some day!

We ate Italian food in Marais, another awesome part of Paris, and to put a cap on the evening Laur, Dave and I went to an Irish pub for a drink –- for some reason it seems like when you’re in any city that’s not in Ireland, the thing to do is visit an Irish pub, so we complied.

On our last day, we packed and checked out of the hotel in the morning, wandered around some more and went shopping. We made our way to the train station in time to get through customs and get onto our train bound for London, city of amazing British accents.