Due to certain family-related circumstances, I’ve been in Strasbourg for the past week, and will be for the next little while. But, I wrote this entry last weekend, and thought that I should post it for the sake of finishing the story of our little Budapest trip:

Tales of our last day in Hungary! Here is The Flaming Lips’ “Yoshimi Battles the Pink Robots, Part I” for your listening pleasure — not because this band has anything to do with Budapest, but it makes me happy like Budapest makes me happy:

Our last day in Budapest was also beautiful, and we packed up our stuff and checked out of the hotel before 11:00 a.m. so that we could enjoy our final hours together in the city. This was a pretty impressive feat in itself, considering the past two late nights of shenanigans. We wandered around for a while in downtown Pest, and eventually meandered down a crooked street in search of brunch/lunch (also known as blunch):

On the way we saw more fantastic architecture. I sometimes mourn the fact that I didn’t get the chance to visit Europe until after I was done my undergrad degree; otherwise, I might have been way more interested in architecture and considered doing my degree in that instead. (What’s that, incredibly useful English Lit degrees? You’re crying in a corner because you can hear me implicitly deriding you again?) Canada’s architecture just doesn’t have the majesty and ornate detail of so many of the various city centres that I’ve seen in Europe. I even thought this building was intriguing, and it’s not particularly beautiful in the conventional sense, just aesthetically pleasing in its own Communist-y way:

We ate lunch at a cute café on Váci utca, a popular shopping street in Pest. I ate beef goulash with dumplings, which was delicious – I don’t think I can ever eat another goulash without comparing it to this one. Dave and I had a spontaneous push-up contest in the street beside our café, which I won (the guns come with working at the bar and lifting giant plates of spare ribs over people’s heads all the time), and then we had to bid a sad farewell to him since he had a flight to catch that afternoon.

After saying goodbye, Mink and I stocked up on beer and set out to explore some more of Buda. We saw this amazing bridge, only one of many intricately detailed bridges that link Buda and Pest:

This is the view from the bridge:

We walked along the Danube River for a while, which looks surprisingly choppy and ominous in this photo for such a sunny day:

This is the view from a different bridge that we crossed to get to Castle Hill, the link between Buda and Pest:

We started the long climb up the hill (pfff, they call it a hill – more like mountain), so we could get closer to this lady on the mount. She is the Liberty Statue, a 132-foot woman holding a palm leaf and symbolizing victory. She is the most prominent figure on the Budapest skyline, which basically means that you can look up from anywhere and have her there in your peripheral vision, judging you for eating that second ice-cream cone:

After much toil in the hot sun, and countless steps, we reached the foot of the Liberty Statue. She is truly breathtaking from up close, and I love the particular angle of this photo: 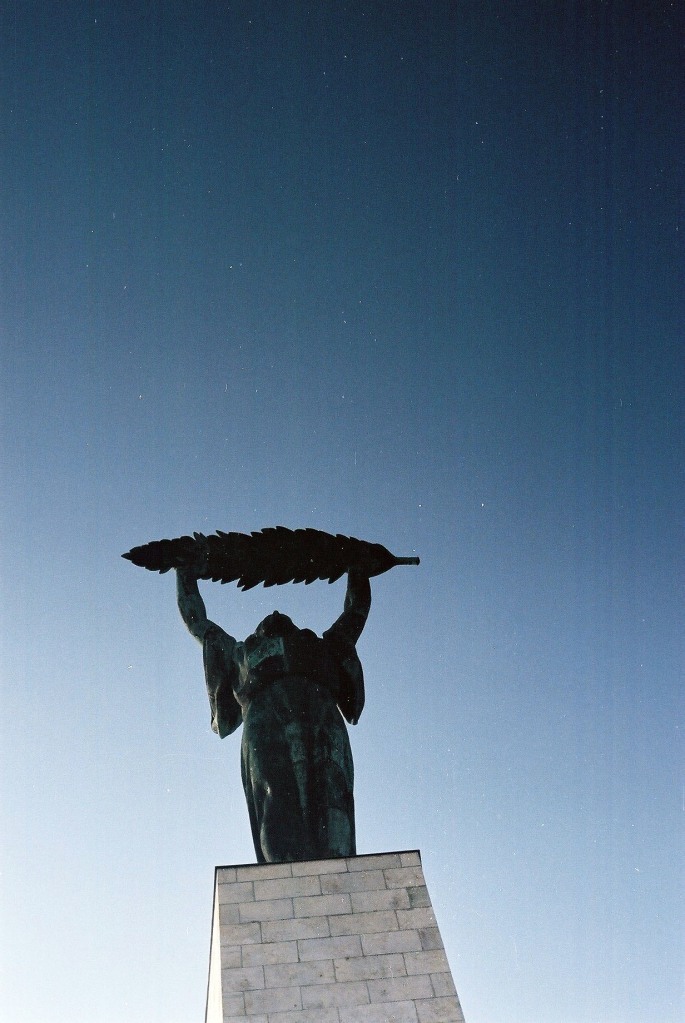 We also saw this guy at the foot of the monument, and he was winning the fight against a seven-headed dragon. That’s nothing to scoff at:

On the other side of the monument was this victory runner, and I like the angle of this one as well, especially with the sun in the top of the frame:

This is the view of Pest (and part of Buda) from the top of Castle Hill: 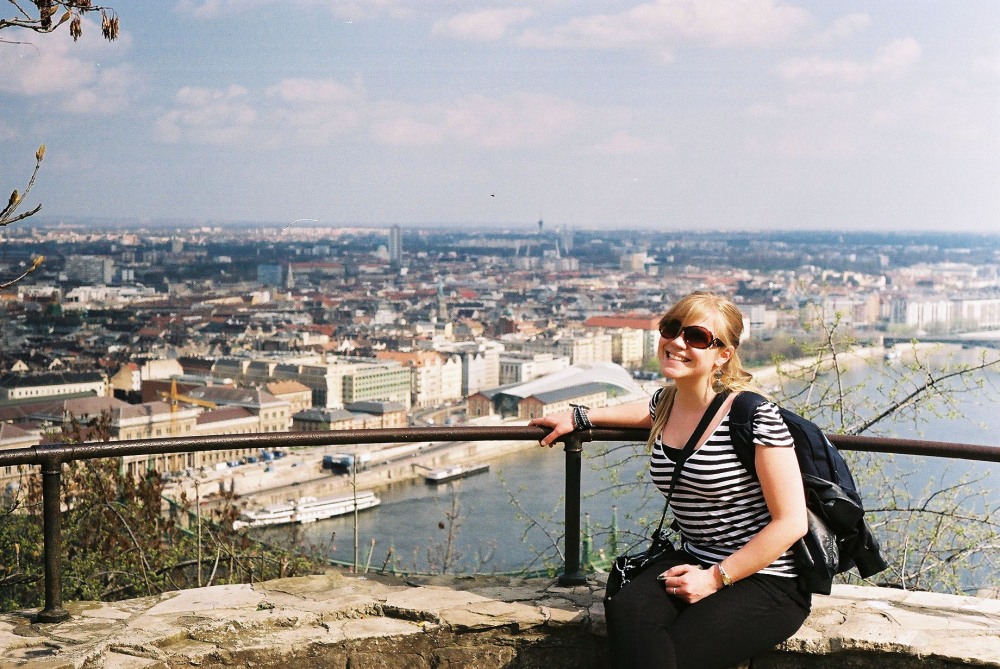 We celebrated our climbing success with some goat beer (Note: beer is not actually made out of goats), which was clearly only purchased because I love goats even though they are obviously evil, and their creepy slit eyes prove this:

We spent the rest of the afternoon drinking beer and lounging in the 25-degree weather, sitting on various benches on Castle Hill and looking out onto the Danube. It was surreal; I am still in shock at how many beautiful cities I’ve already had the chance to see in the past six months. We managed to get ripped off for the first time by our last cab driver, and our ten-minute ride to the bus station ended up costing us wayyy more than it should have. Guess that goat beer lowered our bullshit meters — because goats are evil. But, most importantly, we caught our bus back to Vienna at 7:00 p.m., just as the sun was setting, and slept the whole way home.

I’ve discovered that Budapest, with its hybrid name and a river that simultaneously divides and joins the cities of Buda and Pest, has multiple personalities. This city has a crazy energy constantly humming under its serene surface, seemingly ready to break through at any moment to enrapture the bewildered tourists with their poorly-folded maps and tepid vitamin water. In these three days we only got to see a few of its myriad faces, I’m sure. Although it has many picturesque, even stately, elements in the daylight, it becomes a different creature at night – drunken teens flood the streets and make the city their own until the wee hours of the morning.

I’ll be seeing you again in June, Budapest. Until then, stay crazy/beautiful.

One thought on “Afternoon Drinking in Hungary (Part III)”